99 Reasons 2017 Was A Great Year is the provocative title of an article linked to by economics writer John Mauldin, available on his website.

Before I go much farther, I have to say that I don't think much of this.  There's too much odor of Hippy to it - celebrating some bad fortunes in the fossil fuel industry for one, and they seem to be completely in favor of big government interventions that always seem to bring more unintended consequences than actual improvement.  On the other hand, they point out some real contributions to making the world a better place, mostly brought to you as usual by doctors, research scientists, and, yes, engineers.  Some of the things they list:

3. Zika all but disappeared in 2017. Cases plummeted in Latin America and the Caribbean, and most people in those places are now immune. Science Mag
...
8. Premature deaths for the world’s four biggest noncommunicable diseases­ — cardiovascular, cancer, diabetes and chronic respiratory — have declined by 16% since 2000. World Bank

9. Global abortion rates have fallen from around 40 procedures per 1,000 women in the early 1990s, to 35 procedures per 1,000 women today. In the United States, abortion rates have reached their lowest level since 1973. Vox
...
12. The United Kingdom announced a 20% fall in the incidence of dementia over the past two decades, meaning 40,000 fewer people are being affected every year. iNews

13. Thanks to better access to clean water and sanitation, the number of children around the world who are dying from diarrhoea has fallen by a third since 2005. BBC

Add to that impressive list (largely) from the Evil Devil Big Pharma industry, that Leprosy has almost been wiped out, with cases down by 97% since 1985.  Other infectious diseases for which there are successful vaccines are also being reduced to much lower rates of infection.

Mauldin chimes in with this shocker:


I read last week that there are 2,049 different types of cancer trials being run all over the world. The one I am most focused on is being conducted by a company called Bexion in Cincinnati/West Covington, Kentucky. They are engaged in a phase I trial and are seeing truly remarkable results with late-stage brain gliomas and pancreatic cancer. Essentially, the patients involved in the trial were the walking dead. The team has treated another person with a type of brain cancer for which there is not even a recognized protocol. This type of tumor is completely inoperable: You just die within a year. A thousand people a year get this type of cancer, and there are usually a number of pediatric cases. It is too soon to know the final outcome, but the person treated has gone from being mostly paralyzed on his right side to being up and walking around, and the tumor has shrunk by 59% in just a few months.. All involved are still shaking their heads. But the researchers know the mechanism of action and are ultimately hoping it works on all mass tumors.

The world dedicated more space to parks and conservation


17. Chile set aside 11 million acres of land for national parks in Patagonia, following the largest-ever private land donation from a private entity to a country. Smithsonian

21. A province in Pakistan announced it has planted one billion trees in two years, in response to the terrible floods of 2015. Independent

28. Cameroon committed to restoring over 12 million hectares of forest in the Congo Basin, and Brazil started a project to plant 73 million trees, the largest tropical reforestation project in history. Fast Co.


31. The International Energy Agency announced that nearly 1.2 billion people around the world have gained access to electricity in the last 16 years.
...
34. In the last three years, the number of people in China living below the poverty line decreased from 99 million to 43.4 million. And since 2010, Chinese income inequality has been falling steadily. Quartz

Gaining access to electricity is a big one.  That’s one of the first steps out of poverty. All the modern technologies that enrich our lives and wallets need electricity to work. Gaining it is truly a life-changer.  For an example, look no farther than Puerto Rico, where Hurricane Maria's aftermath still has 50% of the island without electricity and back to literal dark ages.

The list, though, doesn't cover this shocker that John Mauldin put in his newsletter.


We are using roughly the same amount of water in the US as we did back in 1970, but the population has grown by almost 50%. We are producing vastly more food, generating more hydroelectric energy, and doing more of all the other things that can only be done with water. The chart below is from the USGS Water Science School. Other charts on that page indicate that the largest use of water is for the generation of thermoelectric power. And this is the trend all over the developed world: more efficient use and better conservation of water.

Using the same amount of water as we did in 1970 with 50% more population is really an important thing.  It's a jarring reality that as soon as you run clean, treated tap water down your sink, it becomes sewage. 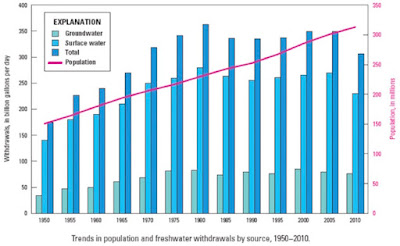 Again, I might quibble with the authors on some items.  They clearly think global warming is a real problem, and they are anti-fossil fuels which, with no real alternative in many places, is immoral. No other commodity in history has helped advance the quality of life for more people.  As I said above, they seem to love big government interventions.  Still, most of the 99 items represent welcome progress.