A Little Ham Radio Side Project

With the solar cycle at near minimum levels, propagation on the higher ham bands (roughly above 14 MHz) has been mostly the Miss portion of hit or miss.  That leads to an emphasis on the lower bands, 3.5, 7, 10, and 14 MHz - there's also a band at 1.8MHz that I've never been that interested in for some reason.  I think I've said here before that all my antenna projects begin with "when it cools off", so now's the time for messing around with antennas.

One of the characteristics of the lower bands is the higher noise levels, and the old ham axiom "if you can't hear 'em, you can't work 'em" is as true now as it was a hundred years ago.  The noise levels, especially 10 MHz and below are far higher (over 1 Million times higher) than the weakest signals the radios can demodulate, which means the radios don't usually determine what you can hear; the local noise does.  This is a plot from  "Reference Data for Engineers". 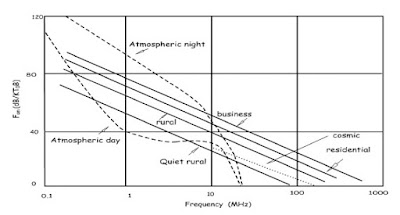 The vertical scale is how much higher the noise is at some frequency, compared to than the normal noise in the receiver bandwidth. Note that just below 10 MHz, the largest noise source by far is the "atmospheric night" noise level; at 1MHz, it looks to be over 100 dB higher than the radio's noise (10 billion times higher).  The diagonal lines show some measurements of noise in business areas, residential areas, rural and "Quiet rural" areas.  The noise at a quiet rural location, perhaps a deserted island, is the only place you can go where the noise approaches being below sky sources (besides the sun).

One of the tricks that hams do to try to reduce the noise level is to use a small, steerable antenna; they receive less signal as well as less noise, but the signal is not always as reduced as the noise is.  This sounds odd, but often the noise is coming from a different direction than the signal is, and by steering the antenna, the noise can be lowered more than the signal.  Loops tend to be sensitive edge on, so pointing the edges at the desired signal peaks it, and turning the loop broadside to the signal decreases it.  With luck the noise might be coming from a different enough direction that the antenna reduces it even a little bit.  Every little dB helps.

Most ham antennas are generally sized to be 1/4 to 1/2 wavelength at the operating frequency, so a small antenna would be under a quarter wave.*

One of the most popular loop antennas was designed by an engineer and publisher named Gary Breed, K9AY, and his antenna is generally called a "K9AY Loop".  Gary designed his antenna for the 1.8 MHz (160 meter) amateur band, finding it useful for 3.5-4.0 (80 meter) and 7.0-7.35 (40 meter) bands.  A typical installation uses two loops set up at right angles to each other, with each loop looking like this: 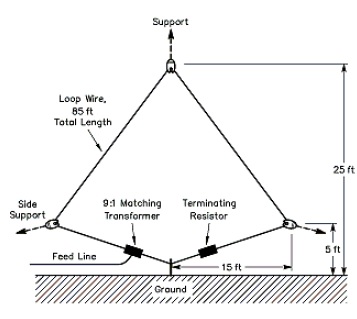 The three corners are supported by handy trees or posts, and the little "matching transformer" on the left becomes a relay box for switching between the two loops.  Why two loops?  It electrically steers the antenna so that the peak and null directions are different.

My main interest is an antenna for the 10 MHz ham band (30 meters), so I thought about scaling this down by 10/1.8 or shrinking by a factor 5.6.  After some pondering, I decided to try for the 40m band and scaled it by 3.9.  The important part is the loop length, so I made that 21.8' around.  I don't have handy trees and I don't intend to make it a permanent installation.  Yet.  I'm gathering the parts to make an antenna to play experiment with out of PVC pipe and fittings.  Naturally, I modeled it in 3D CAD (Rhino3d). 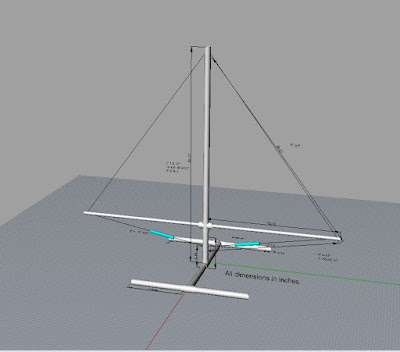 The dimensions aren't readable when scaled out this far, but the center is an 8' tall piece of 2" schedule 40 PVC pipe.  The cross members are 1" PVC, which may sag given that they're 4'4" long. Since the loop is going to be #22 wire, it's not like there's much weight out there, but they may sag under their own weight. The base it stands on is all 2' sections of PVC with some Tees joining them.

This is going to be carried out into the yard for experimenting and then stuck on the back porch when not in use.  Gary's original design is permanent and the ends of the loop terminate in a ground rod, so I'm going to terminate them in a quarter wavelength wire that will stretch out along the grass while it's in use and just be rolled up into a handful of wire when it's on the back porch.

Given the nature of the next couple of days, it will be Tuesday or later before I start building it.

* A couple of nearly indispensable things to memorize: a quarter wave in feet is 234/f with f in MHz.  A half wave is twice that, 468/f.   If you try to derive that from the speed of light you'll get confused because you'll come up with different numbers.   These are about 5% short because lengths of wiring have an "end effect" that makes them behave a little differently.  Besides; 234 and 468 are easy numbers to remember!