Joining the Save the Service Dogs Effort

Miguel at Gun Free Zone ran a post this morning about a petition to save three military/police service dogs scheduled to be euthanized in days over in the UK.  I signed the petition.  Does it matter to the UK if Americans want the dogs to be spared?  I have no idea.  But I think the dogs deserve to live out a life in peace and quiet.  The petition was started by a military/SAS veteran in the UK 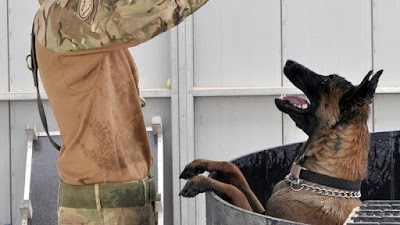 This is the text from the petition.


Plans to put down hero service dogs Kevin, Dazz and Driver are in place to happen next week.

Experienced handlers have come forward to say they want to house the much-loved dogs, who have helped save hundreds of lives.

Kevin and Dazz served in Afghanistan where they searched for explosives and Driver worked for the police force.

Service dogs have saved my life on numerous occasions. We have a duty to save them.

In Afghanistan when I was on a patrol the dogs found an IED in front of us, I was number three in line, I was very, very lucky to survive.

They also saved countless lives when I was in the Special Air Service sniffing out explosives.

We owe them every chance possible to be housed and not killed.