Back in May, I told the story of adding the parts for a rotary (4th axis) to my CNC Grizzly G0704.  That piece concluded at the end of comments with this little statement:


Unfortunately, I didn't notice until yesterday that the Tee nuts and clamping hardware for the mill don't fit! I thought they did. That means I can't hold any work to the table and run [any accuracy/repeatability] tests, at least for now.

The "at least for now" part turned into a long period of inactivity, while I worked on other projects.  I had measured the Tee slot and it didn't seem to correspond to anything standard I could find.  I posted to a forum about it and someone said it was a "sloppy 8mm slot", while another said it was 3/8".  I couldn't get a definite answer so it kinda just sat.

With other projects moving along and the guitar getting close to done, I started looking into this some more.  I was going through the online catalog of a place that sold Tee-nuts in quantity and saw that they offered CAD models to download.  I downloaded the file for the 3/8" nut and imported it into a drawing I had made of the slot.  It fit perfectly!  So all I had to do was find a 3/8" clamping kit, like the 7/16" kit I have for the mill (do NOT mix up those parts!).  Found it, bought it, and it arrived Wednesday.

Naturally, I needed to try it out, and while it's possible to drill a pattern of holes in a circle without a fourth axis just by using a little high school trigonometry, I decided to mount the flywheel of my little wobbler engine to the rotary table, figure out how to zero it and drill the holes on the table.   What I planned to do was center the flywheel on the table, set the Y axis to the circle radius I wanted the bolt holes on and rotate the table 60 degrees at a time, drilling six holes. 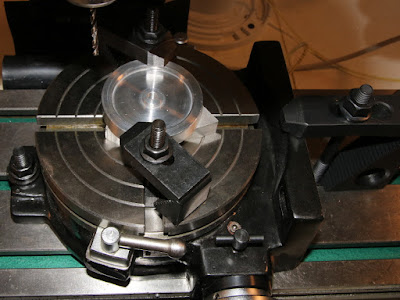 If you look closely, you'll see some pecks that I made on 60 degree intervals by touching the wheel with the spotting drill bit and turning the drill by hand.  If you look closer than that, you can see they weren't centered.

What I needed to do was center the table under the spindle then center the flywheel on the table.  For the first one, I took everything off the table and put my MT2 dead center into the matching taper in the rotary table, then used a countersink in the mill's headstock (with a drill chuck) and centered the rotary table axis under the countersink.  This was done visually with my 4x Optivisors on and the Rumblepad in my hands, The wobble (runout) in the drill chuck was larger than the error I could see.  Then I took out the dead center, put the flywheel back on the table with the clamps in place, but loose.  I took the countersink out of the drill and replaced it with a smaller, MT1 dead center from my Sherline; put the point of the MT1 center into the hole in the flywheel making sure the flywheel was centered and couldn't move before tightening the clamps down. 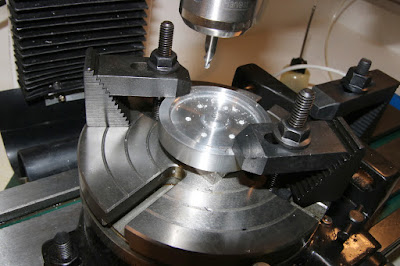 Once I had that, I just went back to all six spots, drilled them with 1/4" bit, then went around the circle the third time with a 3/8" drill.  As my French visitors would say, le voila! 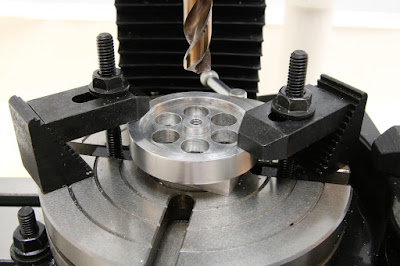 I didn't give a link to the 3/8" clamping set from Little Machine Shop because I'm not really pleased with the quality.  That said, I don't have one to recommend over it.  I'll keep it because it's a convenient package of raw hardware in a plastic holder, but I think every threaded stud needs to have a die run over it, and every nut needs a tap run through it.  Six of six pieces of hardware I picked up needed attention like that.

So now the rotary table is usable for real work.  Running it in this configuration is rather unusual for a fourth axis; this is parallel to the Z axis, and most common is with it parallel to the X-axis, called an A axis.  (Parallel to the Y axis is a B axis)  Also, instead of clamping sets like this, it's more common to use a lathe chuck on the A-axis.  Things like fluted barrels or fluted rifle bolts are some examples of what they're used for, but they're also used for making some types of gears, rotationally symmetric parts of all sorts, and in some industries, they're used to increase the capacity of the CNC tooling.  A group of identical parts are made in regular 3D machining, and then the fixture they're mounted to, called a tombstone, is rotated to bring up another group.  There are three, four or more sets of parts on a tombstone.  Doubtful that I'll do that. 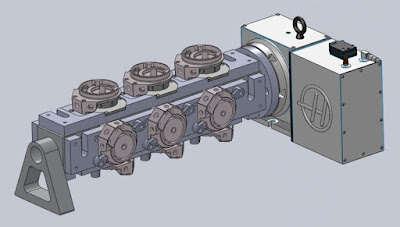 (A rotary tombstone fixture with three identical pieces per side and four sides.  Using this, a shop gets four times as many parts in one machine setup.  Pic from CNCCookbook.com)