The Coolest Appliance You Won't Have Under Your Tree

A little over three years ago, the electronics trade magazines ran some some articles saying that one of the last domains of power vacuum tubes, microwave ovens, were set to be invaded by power transistors.  Of course, I ran the story, too.

There's an unfortunate reality about microwave ovens and the magnetron tubes they use;  Microwave ovens pretty much suck and it's largely because of that magnetron.  OK, maybe suck is a strong word, but other than popping popcorn, heating soup, coffee and some foods cooked in sauces, they just don't do a lot well.  Microwaves and RF magazine's Barry Manz puts it this way:


Today even a high-end microwave oven complete with fan-forced convection for crispy skin and assorted features like multiple cooking settings and a humidity sensor costs less than $500. The microwave oven state-of-the-art is exemplified by products like some from KitchenAid that also steam food based on its type and desired “doneness,” and use the steam to help remove stains from the oven as well. They even have an acoustic sensor that listens to the sound of popping corn and turns off the magnetron when its fully popped.

But they still can’t replace every type of cooking appliance, are too small to cook a turkey, heat unevenly, thaw foods disastrously, can cause a miniature firework display when a fork is left inside, steal moisture from food, and remove some of its original nutrients. In short, they don’t do a great job of either defrosting or cooking.

Thankfully, a lot of research has been going on for the last few years to address the problems.  The research seems to have started with the reasonable question of how to improve the microwave oven but has branched out into the broader question: if you approach cooking more generally, what could you do technologically that would improve everything, not just the microwave oven?

Let's back up for a moment.  The basic problem with a microwave oven is that it uses a magnetron.  Maggies are power oscillators not amplifiers; that is, you feed them DC power and they produce microwave power.  They're free-running oscillators and share the unstable phase and amplitude control of other free-running oscillators.  Because they don't have adjustable power output, they're limited to using simple on/off power controls, and simple waveguides that dump the RF power into the oven's cooking space. To defrost frozen food, for example, the oven will cycle between power on and off at a duty cycle determined by either its programming or the user's commands.  The food is usually rotated, and most ovens have moving metal paddles like a fan as a "mode stirrer" to move hot spots around in the oven.  I don't know about your experiences, but even with those things to even out the hot spots/cold spots, I've found that defrosting something in the microwave oven is most likely going to produce hot spots, cold spots and maybe cooked spots.  I still see frozen vegetables that get burned in small spots.

The future looks rather different.  Having a modern radio frequency deck in the microwave allows possibilities like setting exactly the power desired and leaving it at that level.  Having variable phases across a small antenna array allows forming different power beams and directing the energy around the food in new ways.  Combined with feedback from sensors - receivers - in the chamber, the new appliance isn't very similar to the familiar microwave oven.


Israeli company Goji Food Solutions has made huge strides in creating the basis for a modern cooking appliance based on solid-state power sources, with a portfolio of hundreds of patented techniques, including software and solid-state heating modules. The environment within an oven is extremely complex with millions of points representing an entire oven and food, and varies with what’s being cooked. This is why it’s necessary to assess this environment in real time as the process unfolds, something a magnetron-based microwave oven cannot do.

A Goji-based oven uses a proprietary software tool it calls SARA that combines information about RF parameters is collects every 2 s with a priori data about food characteristics, in order to make decisions. There are no limitations on what can be placed in a Goji-based oven, such as utensils like forks and other metal items as well as metallic-coated cups.

The oven can cook an entire meal, such as a steak, vegetables, a potato, and a dinner roll photo. As Goji has frequently demonstrated, it can cook a frozen fish embedded in a block of ice with precision—without melting the ice. The company hopes to have its first product for commercial applications this year, with consumer versions to follow, and it licenses the technology as well. While the company has not yet introduced the product itself, it is licensing it to appliance manufacturers for use in their own products. [Bold added - SiG] 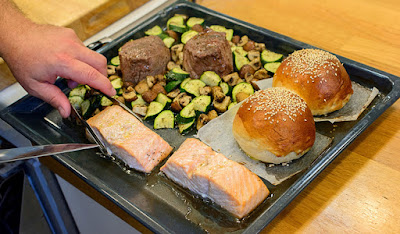 The metal tray containing two cuts of beef, two cuts of fish, two rolls and a mix of vegetables would be challenging to put into any oven and have them all turn out ideally.

Goji is licensing the technology and early models of ovens have started to hit the industrial trade shows.  German high-end appliance manufacturer Miele demonstrated what it calls the Dialog oven (it communicates with the food) with huge fanfare at IFA, Europe’s largest trade show, in August. It will reach the German and Austrian markets in April, followed by the U.S. later in the year.  Current price is $10,000, so it's not aimed at the home/small user, but it seems to offer features that are hard to match anywhere. 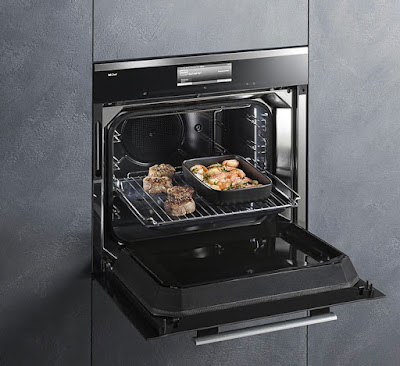 Miele says the Dialog oven reduces cooking time compared to conventional methods by up to 70%, and for example can cook pulled pork in 2.5 hr. versus 8 hr. for a conventional oven. As an example of what the Dialog can do, Miele suggests placing a leg of lamb on a bed of vegetables consisting of red peppers and green asparagus, with any remaining space consumed by potato wedges. After about 45 min., all the food will be evenly cooked to its different requirements, with the vegetables “slightly al dente” and the potatoes soft. This obviously couldn’t be achieved in a microwave oven or even a conventional oven. When roasting is required, the oven automatically applies radiant heat.

This is just the leading edge of the oncoming wave.  The Microwaves and RF article mentions an oven called IBEX One from Illinois Tool Works that is clearly aimed at industrial users.  It's list price is $18,000; it's big and feature laden.


It measures 26.6 in. high × 32 in. wide × 29 in. deep, and uses a real-time, adaptive, heat-sensing system that uses heating algorithms designed for custom menus and common kitchen operations. Programming and uploading of recipes and unique cooking functions is available via a USB port to expand menu offerings.

They also mention  what appears to be the first of these new RF ovens aimed at consumers: Chinese appliance company Midea has announced a 300W desktop oven called its Semiconductor Heating Magic Cube.

You just know this is going to have to start a whole new generation of cookbooks, because nobody knows how to cook platters like the one Miele describes or Goji pictured above.