The Coming Revolution in Medicine

The coming revolution that everybody has been talking about and everyone knows about is genome-based medicine.  Recently, I stumbled across a dramatic graph that throws some light on this.  It shows the decline in cost to sequence a human genome. 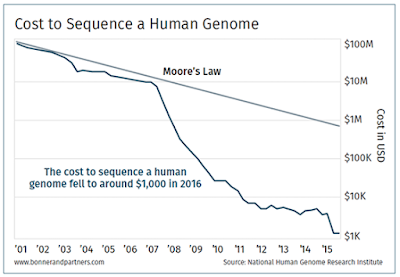 The first sequencing of a human DNA sequence was announced in 2001 and cost a team of scientists close to $100 million.  You can see by this plot that cost has dropped by five orders of magnitude in 15 years and continues to drop.  From 2001 to 2007, the speed and reduction in costs of genetic sequencing had been moving as fast as Moore’s Law – roughly doubling in speed and halving in cost every 18 months.  But something amazing happened in 2008… The cost of genetic sequencing began dropping at a speed five times that of Moore’s Law.   We see in the last year that at least one of the major providers, UnitedHealthcare, has decided to reimburse for DNA sequencing if the physician recommends it and in certain circumstances (pdf warning).

Some of you may be thinking "$1000?  I know I can buy one from 23AndMe for $200.  What gives?"  I'm not sure, but I believe that 23AndMe doesn't do a complete sequencing, only decoding some percentage of the genome.  The company puts it this way:


The analysis we perform is called genotyping. Genotyping looks at specific locations in your DNA and identifies variations. These variations make you unique.

In choosing these specific locations, we focus on the variations that are known to be associated with important health conditions, ancestry and traits. Genotyping is a great way to start understanding how your genetics can impact your life.

At this point, this science is in its infancy.  There are some gene variants, called SNPs (snips), which are already known to be linked to higher chances of some diseases - I recall having written a somewhat philosophical piece on some of this, after hearing about actress Angelina Jolie's decision to have a double mastectomy after confirming she had the BRCA ("Brack-a") breast cancer genes, but my point was the deeper question:


If you could know what you were likely to die of and when you were likely to die, would you want to know?  Let's leave out Twilight Zone-style "seeing the future", and restrict ourselves to genetic things.  (The TZ did a story centered on a camera that could see five minutes into the future).  As the genomic research of the last 10 years progresses and grows, more of us will be faced with this question.  And the logical extension of knowing that you have a genetic tendency that will probably kill you is that you might want to do something about it. Would you want to know if there was nothing you could do about it?

Always into geeky self-experimentation, I signed up for the 23AndMe health and ancestry package back in September.  After they email your report, you have an option of downloading a text file of all your results; in my case, this file was 638,480 lines long.  Here's where it gets interesting: there are companies that have sprung up to help you interpret your results.  The one that hooked me is called Promethease.

According to the company


Promethease is a literature retrieval system that builds a personal DNA report based on connecting a file of DNA genotypes to the scientific findings cited in SNPedia.

SNPedia is worldwide central database of studies on the specific SNPs.  This personal report costs $5 and is mailed to you as an html file that opens in your browser and links to interpretations of everything in your (638,430 line) file.

This information is interesting but interpretation is not as straightforward as you might think.  As an old guy, I might be interested in the chances of prostate cancer.  According to Promethease, there are 98 SNPs listed with an effect on the disease. They tell me I have 8 bad SNPs, 16 good ones, and the other 74 are unknown at this time.  Do I have more or less risk than any other old dude?  Beats me.  I don't have a clue.  They do tell me useful things, though, like I that have a gene that makes me a slow metabolizer of a handful of common drugs (which they list), that I'm more likely to have bad side effects from some other drugs by name, and that I'm 5x more likely to have side effects from statins.

It's not uncommon to look at the Promethease report and find genes that say both a higher and a lower risk of some condition.   The only thing I know for sure is I'm too old to die young from anything - but I don't need 23AndMe to tell me that.

As more and more people get sequenced and volunteer information on what diseases and conditions they suffer, the science will get better, and the information more useful.  We're already starting to see good things come out of the genome research. It's likely to get better. 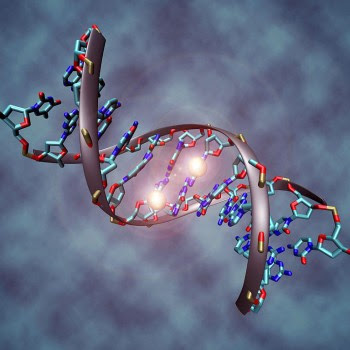