The Palestinians are Revolting - So What Else is New?

You've heard that since President Trump decided to keep yet another campaign promise (as well as a promise apparently made by the last three presidents) and move our embassy to the capital of Israel, the Palestinians are revolting.  (Example)  Of course, it doesn't take much to make them riot.  Palestinians rioting are about as unusual as liberals calling everyone "Racist!" - after a while, you have to ignore them.  That threshold was about 20 years ago.  Unfortunately, it's not just them: much of the world seems to be upset about one country moving its embassy to the capital city of the country it's in.

All of which makes me wonder.  Is Israel the only country in the world that's not allowed to declare their own capital?  Nobody cares if our embassy to the UK is in London, the embassy to France is in Paris, that the embassy to the Phillipines is in Manila or any other.  Those countries declare their capitals and we put our embassies there for efficiency.  (Obviously, this is by invitation with the approval of the hosting country.)  No, not Israel, though.  The world has decided to put their embassies about an hour away in Tel Aviv, so that if their ambassador has to visit anyone or anyplace in the capital, it requires a motorcade, moving security teams, and all that hassle.

There seems to be an assumption that Jerusalem is just the small, walled portion called The Old City, about 0.3 square mile out of the 48.3 square miles of modern Jerusalem - 0.6% of the area of the modern city.  The Old City is well named; parts of it, though certainly not all, are nearly 3000 years old.  But that's not what we're talking about.  We're talking about the other 48 square miles - where the modern government buildings are, along with the parks, restaurants and nightlife you'd expect in any modern city. 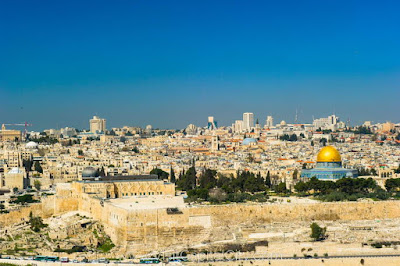 View of Jerusalem, looking over the old city (the muslim "dome of the rock" temple is the gold dome on the right), but you get a small sense of how small the old city is inside the larger, modern city.  The same sort of view can be had in every cardinal direction.  (Source)

The whole thing strikes me as silly.  Why is it that every other sovereign country on the planet gets to decide what its capital is, but they don't?  For that matter, if their capital wasn't Jerusalem or Tel Aviv, but we decided to put our embassy in Jerusalem, why should that matter?