Bottom line first: Justice League is thoroughly enjoyable fun and worth seeing.  It's the story of the formation of what DC Comics fans all know of as The Justice League of America.  As far as I can tell, it's about the tenth or 12th version of the story.  A month ago, I pretty much raved about Thor Ragnaraok, and if I had to see only one, I'd see Thor simply because it's more fun, and I like the characters more.  However (and you that was coming, right?) this is easily the best DC comics movie in a long time; possibly ever.  I recall the 1989 Batman movie, with Jack Nicholson as the Joker, had its dark side, but it also had music by Prince that gave it a light feeling, and I recall it as a lot of fun.  (disclaimer about DC movies: I didn't see Suicide Squad.  Never read the comics; don't know anything about it)

Ever since then, the DC movie folks have emphasized the dark side of their characters; for example that Batman is a "broken" man from losing his parents, and the costumes for all of them have gotten darker than the comic book version.  Like this comparison of new and old Superman colors. 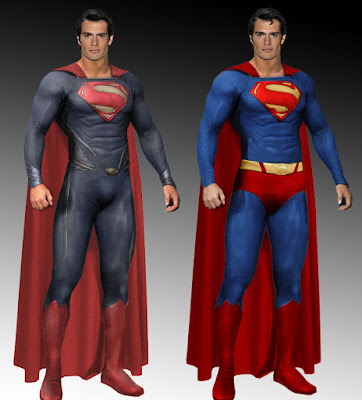 In this promo photo, you can see how muted all the character costumes have become. 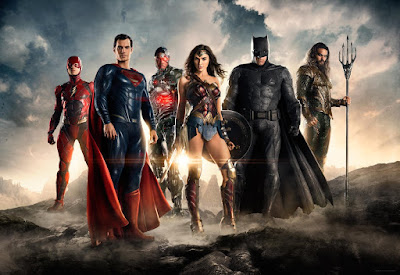 Superman is central to the story, but the majority of screen time goes to the others.  The story centers on Batman (Ben Affleck) getting a group together to fight off a planetary invasion.  In the previous Batman movie, he meets Diana, Wonder Woman (Gal Gadot) and the two of them are the team.  He first recruits Aquaman (Jason Mamoa) who initially rejects him until he realizes the seriousness of the problem.  Then he recruits Flash (Ezra Miller) and Cyborg (Ray Fisher) with varying degrees of ease.  The invasion begins almost immediately.

Y'all know I'm a fan of these light, comic book movies, but if Thor: Ragnarok was a full five stars this one is four stars.  It simply wasn't as much fun of a romp as Thor was.  Both Mrs. Graybeard and I thought that Gal Godot pretty much owned the movie, but I also liked the baby-faced kid they got as the Flash.  He injected a few good pieces of light, comic relief into the movie.

Oh, and DC decided to pick up the Marvel habit of adding some teasers into the credits.  Stay for the whole thing.  If you're into that.