Lately, I've been letting out a bit more of a sigh of relief when hurricane season is over.  It also usually coincides with a second "rainy season" here.  Unlike the summer rainy season, which is more predictable in hitting during the afternoon, and more like every day, the winter rainy season is rain that comes in advance of a cold front.  Winter rain can be any time of day and more like one or two days a week.

So how did it stack up against NOAA predictions?  NOAA did pretty well this time in this regard: 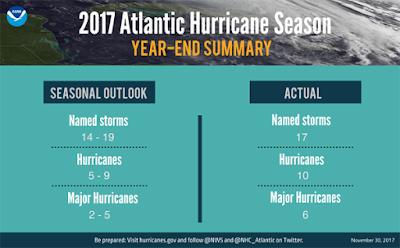 They got in the right range in number of named storms, and both Hurricanes and Major Hurricanes are off by the same storm.


Based on the Accumulated Cyclone Energy index, which measures the combined intensity and duration of the storms during the season and is used to classify the strength of the entire hurricane season, 2017 was the seventh most active season in the historical record dating to 1851 and was the most active season since 2005.

Watts Up With That reports lots of interesting little details from NOAA, but I'll leave that to those  interested.  My main concern is the quality of the forecasting and I'm of the opinion that they aren't much better than they were five or ten years ago.  No, I can't quantify that.  I don't have metrics to do so.  I posted some of my discomfort with the way forecasts are made back after Irma.  A month before that I examined one potential storm in particular, and how bad the long range forecasts on it were.

The winds to be avoided in a hurricane are within the first few miles around the eyewall.  Even in the strongest storms, hurricane force winds don't cover 50 miles, it's more like 10-30 miles.  We have evidence that hurricane conditions in Irma, when she crossed the Keys as a Cat IV storm, were on the order of 20 miles wide, including the eye.  We have evidence that when Irma crossed Naples it wasn't even a hurricane.  Hurricanes are chaotic, though, and it's very common for them to cause tornadoes as the winds sweep onshore.  There are many aspects that appear to be fundamentally unpredictable.

To borrow a quote from myself back in this August:


Long time readers may recall that last October, within 24 hours of closest approach, the NHC forecast Hurricane Matthew to be over my head as a Cat IV storm. Actual closest approach was about 50 miles away and a much weaker cat II. We didn’t get hurricane force winds. That’s an enormous difference in the risk from the storm, since wind damage scales as velocity squared.  I'd like to see them more accurate at 24 hours, let alone at 10 days.

I'll go easy on them.  At 48 hours out, I want them to peg the center to within +/- 5 miles.  It's not like they don't have the most advanced supercomputers known to man at their request, right?  Do you think they can do that by 2050?