Back in 2013, I posted a story on the discovery of what was being called "Dark Lightning".  Lightning was found to be producing enough energy to produce gamma rays and antimatter.  The diffuse gamma radiation and the spotlight beam of antimatter were called Dark Lightning.  The main reason for posting this was that it was cool to find that lightning, which is an everyday occurrence around here for half the year, is producing gamma radiation, something which had been thought to be far too energetic for a thunderstorm.  (The secondary reason was that the researcher behind the paper was a professor from our local college, the Florida Institute of Technology; and the professor had been a faculty advisor to the young padawan engineer I was helping at the time. )

In the intervening years, researchers have continued to investigate the gamma ray production and this week ARS Technica reports that Japanese researchers have discovered lightning leaves behind a "radioactive cloud".


Gamma rays rays are primarily noted for their interaction with the electrons of any atoms they run into—it's why they're lumped in the category of ionizing radiation. But they can also interact with the nucleus of the atom. With sufficient energy, they can kick out a neutron from some atoms, transforming them into a different isotope. Some of the atoms this occurs with include the most abundant elements in our atmosphere, like nitrogen and oxygen. And, in fact, elevated neutron detections had been associated with thunderstorms in the past.

But a team in Japan managed to follow what happens with the transformed atomic nucleus. To do so, they set up a series of detectors on the site of a nuclear power plant and watched as thunderstorms rolled in from the Sea of Japan. As expected, these detectors picked up a flash of high-energy photons associated with a lightning strike, the product of accelerated electrons. These photons came in a variety of energies and faded back to background levels within a couple of hundred milliseconds.

But about 10 seconds later, the number of gamma rays started to go back up again, and this stayed elevated for about a minute. In contrast to the broad energy spectrum of the initial burst, these were primarily in the area of 500 kilo-electronVolts. That happens to be the value you'd get if you converted an electron's mass into energy.

The article goes into fair amount of detail, but one of the conclusions is that one of the gamma ray reactions in the storm acts to produce Carbon 14.


The 500keV photons the authors were seeing weren't a direct product of the radioactive decay. Instead, 13N and 15O decay by releasing a neutrino and a positron, the antimatter equivalent of the electron. These positrons will then bump into an electron in the environment and annihilate it, converting each of the particles into a gamma ray with the energy equivalent of the electron's mass. That's exactly the energy the researchers were detecting.

(The neutrons that are kicked out typically recombine with other atoms.  For example, adding a neutron to 14N causes it to kick out a proton, which forms a hydrogen atom. The remaining nucleus is 14C, a relatively long-lived radioactive isotope of carbon.)

That means that not only is lightning producing gamma rays, the changes caused by the gamma rays are then producing the radioactive decay that they're observing.

The ratio of 14C to 12C is how carbon dating is done, and Wikipedia says the conventional story on the ratio was that the amount of 14C was set by cosmic radiation changing Nitrogen to Carbon.  Now that we know it can happen due to thunderstorms that seems like it could conceivably change the dating methods.  If nothing else, the amount of 14C coming from thunderstorms could be higher in the tropics and lower near the poles, giving different ratios of the two isotopes that are dependent on latitude and not age.

It's interesting to watch this relatively new science being developed.  The ARS article concludes with the observation that "This doesn't mean that thunderstorms are major radiation risks." which seems to be overstating the obvious.  If the radiation from thunderstorms was high enough to be troublesome, it would have been detected ages ago - we can detect far smaller amounts of radioactivity than are dangerous.  It's cool, though, to see new phenomena being discovered in things that we've been seeing for as long as we've been aware. 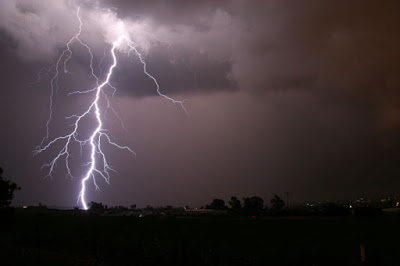