Your Feel Good Story of the Day

Story from WGN9 in Chicago by way of PJ Media.

Kate McClure, 27, of Bordentown, New Jersey, was driving into Philadelphia on Interstate 95 last month to visit a friend when her car ran out of gas.  McClure pulled over and got out of the vehicle to walk to the nearest gas station.  That's when she met Johnny Bobbit, Jr., a homeless ex-Marine who happened to stay near where she ran out of gas.


Bobbit, however, was having none of it. He knew the neighborhood was a dangerous place for a woman to walk alone:


[Bobbit] told me to get back in the car and lock the doors. A few minutes later, he comes back with a red gas can (and) his last 20 dollars to make sure I could get home safe.

This is a serious act of generosity from anyone. But Johnny Bobbit is homeless, and that last $20 may have meant all sorts of important things to him. He gave it to someone in need, even though most of us would have seen Bobbit as the one in need.

He fell on hard times due to drug use and money problems, but he remembered how to act like a Marine.

The articles don't say how long it took for them to get to know each other, but it does say that McClure said she didn't have money to pay Bobbitt back on the night he helped her.  She returned to the spot where he sits several times offering him a few dollars or supplies each time.

At some point, McClure got the idea to put the story up on GoFundMe, hoping to help him over the rough patch in life he had been going through.  She originally wrote on the GoFundMe page:


I would like to get him first and last month’s rent at an apartment, a reliable vehicle, and 4-6 months worth of expenses. He is very interested in finding a job, and I believe that with a place to be able to clean up every night and get a good night’s rest, his life can get back to being normal.

And then Americans did what Americans do.  With a goal of raising $10,000 to help out Johnny Bobbit, so far the effort has raised $382,000.  It will probably gather more contributions. 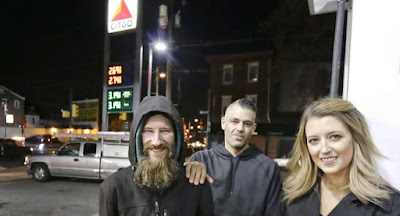 Based on McClure saying that she didn't have $20 that night to repay Bobbit, I'm guessing she's not exactly "made out of money" either, but there's no indication she's doing anything other with the GoFundMe proceeds than do her best to help out the homeless Marine.

Across the Northern Hemisphere we've begun the week having the earliest sunset of the year.  The longest night of the year is a few weeks away.  It can seem like a dark cold world.  This story is a little ray of sunshine and warmth that makes me feel good about people.