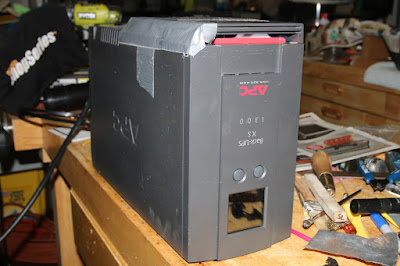 At least a year ago, this APC Back UPS 1300 died.  The batteries, already a replacement set, wouldn't take a charge anymore. It has sat in the shop, upside down, waiting for me to do something about it.

During Irma, another UPS started emitting the unmistakable smell of burning electronics.  We shut it down to troubleshoot it after the storm.  I pulled the batteries and did a life test on them with my Computerized Battery Analyzer (CBA-IV).  The batteries were fine.  Put the system back together and it ran for a while, then starting smelling like smoke again.  Not good.

So the UPS itself was scavenged for useful parts and the batteries put aside.  Yesterday, I put "2+1" together and put the two good batteries into the old but good UPS.  It seems to work fine and doesn't stink.  There's the small matter of the batteries being too big for the case, but that's kind of a feature.  It gives more back up time than the original.  If I wasn't quite as willing to live with the battery cover duct-taped on, I'd figure out how to make a new one.  I know!  I'll build a 3D printer from scratch to print a cover!