One of the obvious ways to ensure that cars on the road avoid each other and cooperate with each other is to have them communicate with each other.  This is an area that's getting a lot of attention among radio suppliers: Vehicle to Vehicle (V2V) and Vehicle to, well, just about anything: infrastructure, lights, traffic sensors and more.  Together, this all gets wrapped up in what's being called V2X.  There's just one problem: there's more than one way to do it and the industry hasn't chosen one.


The ITS-G5 technology, which is based on the modified IEEE 802.11p WiFi standard, is opposed to the C-V2X, which is based on the 3GPP standards. Although BMW, one of the “inventors” of the V2X technology, has already moved to the C-V2X camp and industry heavyweight Qualcomm recently launched a reference design that can be regarded as a clear commitment to C-V2X, the dispute has not yet been resolved. There are still good reasons for ITS-G5, as shows our interview with Onn Haran, co-founder and CTO of chip company Autotalks. The company is regarded as one of the pioneers of V2X technology.

As is often the case, these technologies aren't compatible and will interfere with each other.  That means there can be only one.  It becomes a high stakes game of each group developing their products and pushing to get their system mandated.  They push government agencies, not just here, but worldwide.  This interview is from EENewsAutomotive in Europe, but the same thing is going on here.

Commenter Dan, in response to the last post, voiced the idea:


And there has to be a motive behind the massive push to create driverless vehicles. It's not as if the technology is cheap, it's not. It's a very expensive bit of engineering to design, create and implement. It makes one ask why....why are they trying so hard to get this technology into the real world. The realist in me leads me to conclude that such technology will assist those in power with what they enjoy most. CONTROL. If left unfettered eventually autonomous vehicles will become practical ( a term that is subject to debate of course). Eventually the technology will become widespread.....and once it does the power mongers will do what they always do....legislate. They will seek to make it illegal to use a vehicle that is NOT autonomous....because "do it for the children" etc. Once they succeed in banning vehicles that humans can control they will essentially have TOTAL control over all transit and travel in America. And THAT is worth the cost....both in $$$ and in lives...at least to a politician.

I'm sure a lot of people think this, but I'm not sure I want to "go there".  While it's a possible motivation, that's playing a long game.  Many of us, perhaps curmudgeonly, think that this is not coming immediately; it's 25 or more years out.  With a few exceptions, government has shown over and over that they're really not capable of thinking for the long game.  "Long" means the next election cycle.  That said, there have been a few playing a conscious long game of slowly taking over.

I think the answer is more immediate and it's evident in the story about competing standards for the vehicle communications.  The "computer revolution" of the 80s and 90s made the electronics industry, especially the semiconductor side, extremely hype cycle driven.  The chip makers built infrastructure to supply parts for a demand like the computer sector had during those days.  Now that computer sales have dropped, they're constantly looking for the Next Big Thing.

Today, the Next Big Thing seems to be "The Internet of Things That Don't Quite Work Right".  However autonomous cars are a gold mine of epic proportions for the chip makers.  I think they say the typical car has around 25 microprocessors in it now; that number will jump, and the number of sensors (like the radar or synthetic vision) will skyrocket.  The number of this kind of sensors now is essentially zero.

There are other factors, of course.  For one, the hype is creating interest among the buying public.  As the AAA study I wrote about months ago says, while the majority of people surveyed are afraid to ride in a fully self-driving vehicle, the survey also found that a bigger majority (59%) wants to have autonomous features in their next vehicle. For another, it's clear that agencies like the National Highway Traffic Safety Administration (NHTSA) wants them, evidenced by them goosing the process to put a regulatory framework in place.

So I see this as sort of a Perfect Hype Storm: the semiconductor industry wants it to sell chips every year*, the auto industry wants to help flagging sales, the Feds probably want it because those deplorable people won't cause so many accidents (greased liberally with knowledge the industries involved will be spreading money around for influence in perpetuity), and finally, the people are intrigued by the idea of perhaps having the car handle some of the tedium of a daily chore. 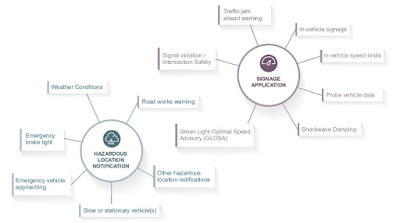 A look at the V2X communications space, illustration from reference PDF at Innovation Destination article.

* The largest sales volume single part that semiconductor giant Analog Devices sells is not an analog integrated circuit.  It's the deceleration sensor in your seat belts that locks them in event of an accident or other sudden jerk on the belt.  It's a MEMS device (Micro Electro Mechanical System).