I've been looking forward to seeing Thor: Ragnarok, the latest installment in the Marvel Cinematic Universe and third Thor installment since the first trailers started leaking out last April.  It looked like it was going to be fun and it turns out that's an understatement.  Aside from the very, very rare comedy that leaves me laughing until my sides hurt, I don't think I've laughed as much at a movie.

The name, simply pronounced rag - na - rock, is the mythical end of days for Asgard, the kingdom Thor is from.  The movie, then, is about the apocalypse, and is done extraordinarily light-hearted, which is probably a good way to handle the End of Days, ("it's the end of the world and I feel fine").  There are one or two light-hearted scenes in the trailers - the big one at the end with Thor recognizing the Hulk, whom he's supposed to fight to the death, and breaking out in a smile shouting "We know each other!  He's a friend from work!"  The first scene in the trailer is shown as deathly serious, but actually isn't that way in the movie.  Something that stood out in my mind was the scene in that trailer that features actress Cate Blanchett as Hela, the Goddess of Death and the villain of the movie.  The scene was changed from the first way we saw it. 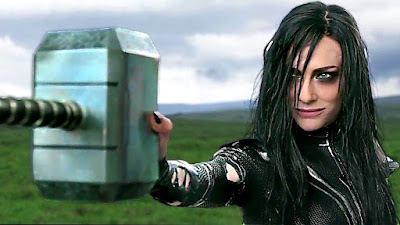 Besides the regulars of Chris Hemsworth as Thor, Tom Hiddleston as Loki and others you'll know if you've seen the first two, the move features Blanchett (who seems to be a very versatile actress), Jeff Goldblum who is masterful playing some rather eccentric people.  Probably the only bow to political correctness is making Tessa Thompson, who's apparently a small, African American woman, the Valkyrie.  Valkyries are from Norse mythology (as is the whole Thor universe) and usually depicted as tall, blond, Norse women.  Ignoring that, Thompson does well in the part.

Y'all know I'm a fan of these light, comic book fantasy movies, but I give this a full five stars and am even thinking of seeing it again.