So goes the clickable title from the Foundation for Economic Education, FEE.

TL:DR version: it's what you think.  These places are run by corrupt leftist politicians.  There's too little freedom.  They enact laws to tax and control everything, hurting economic freedom. 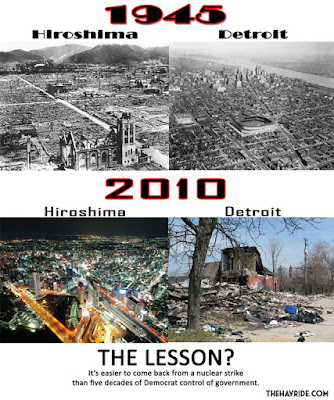 The FEE article does a more thorough analysis of the story relying heavily on research by an economist here in Florida, Dean Stansel, of Florida Gulf Coast University:


There is a wide consensus amongst economists that economic freedom largely determines the wealth of nations and metropolitan areas are no exception to this rule. As Economist Dean Stansel, in his paper, An Economic Freedom Index for U.S. Metropolitan Areas states, “higher levels of local economic freedom are found to be correlated with positive economic outcomes.”
...
Both Baltimore and Detroit make it into the top 5 cities with the highest tax burdens, according to the Office of Revenue Analysis. As for New Orleans, Louisianans face the third highest combined state and local sales taxes, as well as excessive levels of deficit spending. These three cities are also plagued by excessive and even bizarre occupational licensing laws. Louisiana licenses florists, Detroit licenses hair-braiders, and Maryland counties license fortune tellers. If only Maryland’s licensed fortune tellers could have predicted that big government would cause businesses to flee these cities.

The truth, of course, is that the US is sprinkled with third world cities. Remember the story about Seattle removing the laws against public defecation and the problems that caused?  It's going on in more places.

Of course, if you're a reader here, you just might be a firearms enthusiast and you know that Detroit, Baltimore, and New Orleans are rife with violence.

As you might expect, how economic freedom is measured is up for discussion and Stansel lists both the most and least free cities.  Of the ten most free cities, seven are in Florida; mostly smaller cities, not the big blue cities of Miami, Ft. Lauderdale or Orlando. 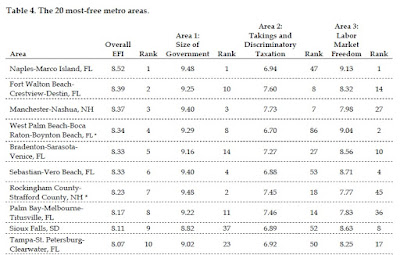