God Help Us All

In the Austrian city of Salsburg, they're putting airbags on lampposts because of people walking into them while looking with their phones.


Lampposts are being covered in airbags to stop so-called 'smartphone zombies' bumping into them as they walk around staring at their screens in an Austrian city.

Salzburg authorities say tourists are increasingly hurting themselves by not looking where they are going while checking their devices.

Locals have described mobile phone users as Smombies, the short form for a 'smartphone zombie', and civic chiefs are taking action to stop them getting injured. 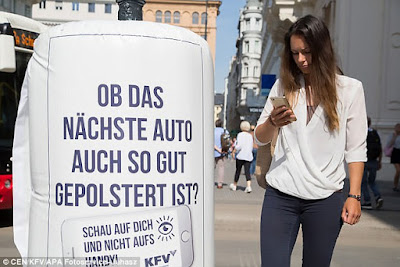 They call this an educational program to get people to be more aware of the world they're in and they believe it will change behaviors.  I doubt that.  This is being run by the city Board for Traffic Safety (KFV in Austrian) so that tells me the tax payers are paying for this (you can see their logo in the bottom right of the sign on the lamppost).

Actually, the worst part of this story is that Salsburg isn't the only place.


In China, there are special sections of certain pavements that are reserved for people using telephones and walking at the same time.

In Honolulu anyone crossing the road and looking at their phone will be fined.

In the German city of Augsburg they have started putting traffic lights on the ground where they can be more easily seen by people staring at smartphones.

I don't know what to add to this.

Posted by SiGraybeard at 4:07 PM

Labels: big freakin' out of control government, what?