A Little Update on Son of Side Project

I don't want to jinx myself, but I could be getting into the last little bit of the project I call Son of Side Project; adding a wood side to my Breedlove demo guitar that was introduced to Mr. Bandsaw and hasn't been complete in perhaps a decade.

In that last update, I had gotten to the point where I was ready to glue on the internal wood strips (kerfing strips) that would hold the side.  I eventually got those glued in place.  I had some issues with a couple of pieces of it shifting before the glue would hold it.  As a result, I had to learn how to loosen fish glue and re-stick the pieces.  I replaced one. 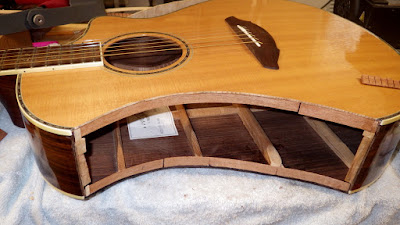 Once the side was glued on, I took it down to my friend who has a fixture designed for routing the top of the guitar to add the trim binding strips.  The fixture uses a small, trim router and ball bearing collars to allow an exact width and depth channel to be cut. 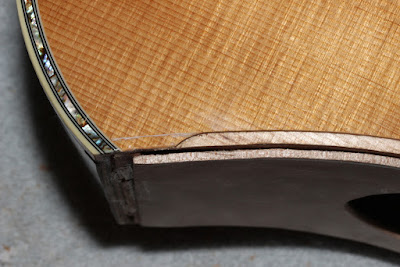 This is how I brought it back last Wednesday.  There was an unfinished end like that on the front and back of the guitar where we didn't push the router too far.  So how to cut those off and extend the channel the rest of the way?

Rather than try to do this with power tools, like the rest of the channel for the binding, I went for hand shaping the wood.  I clamped a piece of wood to the top of the guitar as a guide and used a 1/4" wide woodworking chisel.  I cut straight vertically leaning the chisel against the guide to form the back wall of the channel.  The flat back of the chisel would form the new back, and I pushed the chisel in a little at a time (no hammer!), then went in parallel to the top from the side taking out small chips to remove the spruce I had just scored with vertical cuts.  It's a lot like chiseling out the waste in a dovetail joint, parts of a mortise, or pretty much anything.

This picture is preliminary, before I finished cleaning up the channel, and it's magnified much more than I was seeing with Optivisors on (which is why I took the pic).  That step from top to the floor of the channel is 1/16". 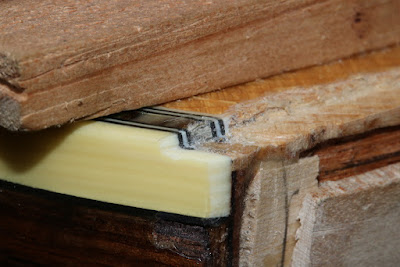 Then it was time to start gluing up strips to try and match the colored strips you see in cross section in the corner.  I've done this a couple of strips at a time, and now have that top strip in place. 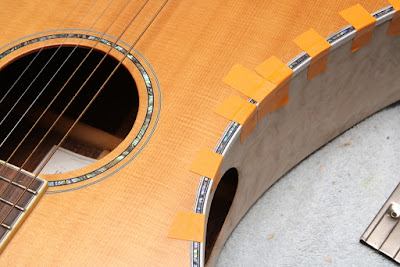 The tape is in place as a "clamp" for 12 hours, so I can take it off in the morning.  There's a mess of to cleanup here, and some gaps that need to be filled with something or other.  The sides and back trim need to be done as well, but that will be simple compared to this top strip.

Like I say, I don't want to jinx myself, but I'm making progress.