Is Tesla Motors Heading for Collapse?

That's the provocative idea from financial anlyst and publisher Bill Bonner in one of his daily letters this week.

The reasons are simple and financially obvious.


The company’s market cap – the value of all its outstanding shares – is at $53 billion. That’s higher than Ford’s market cap, despite Ford making profits of $4.6 billion last year and Tesla losing $67 million.

And Tesla has almost as high a market cap as GM, which had more than $9 billion in earnings last year… and which sold 10 million vehicles versus Tesla’s 76,000. ...

And the losses are getting bigger; a record $619 million in capital disappeared in the last quarter alone.

Graphically, from farther down the piece: 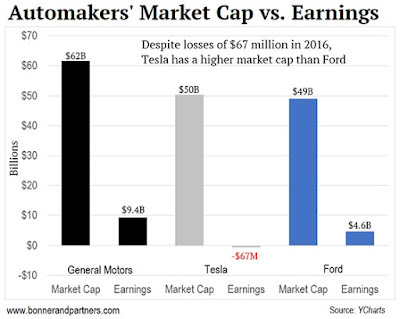 There is no rational reason for Tesla to have a market cap 80% of GM's when they ship 3/4 of 1% of the number of cars GM does (76,000 vs. GM's 10,000,000).  If the reason for the stock market price isn't the pure financials of the company, then it becomes the personal mystique of Elon Musk.  A Cult of Personality around the owner of the company.

Anybody remember John Delorean and his Delorean Motor Cars company?  The same sort of story 40 years ago in the 1970s.  The Delorean was sleek and futuristic with its gull-wing doors.  With a largely stainless steel body, it didn't require the painting and finish upkeep that entails.  It was the car that had to be chosen for "Doc" in the "Back to the Future" movies. 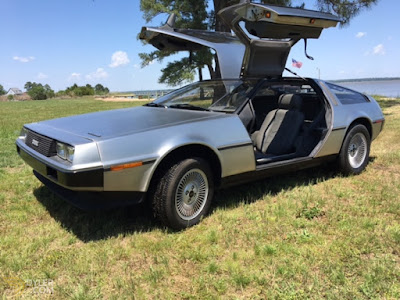 (image source)
While John Delorean might have been visionary, he never returned on investors' money.


Poor Mr. DeLorean launched his car company in 1975. Over the next years, he took in – and mostly destroyed – approximately $100 million.

Toward the end, he was so desperate for financing that he was an easy target for the feds’ entrapment program. Claiming to be investors, FBI agents coaxed him into talking about importing $24 million worth of cocaine into the U.S. and taped the conversation.

DeLorean beat the rap, but DMC went bankrupt in 1982.

Later, he faced challenges from investors and car buyers and was driven into personal bankruptcy, too. He lost his home in 2000. Then he lost his mind… suffering strokes, which killed him in 2005.

Much like reasoning that you don't want to turn your government over to a charismatic con man, you don't want to invest in a company run by a charismatic con man.  Yeah, I know, times are different now: nobody invests for the long term on the company's actual value.  They buy stocks, let them pump up some amount, sell them to a bigger fool and move on to the next target.  By any conventional measure of stock values the entire stock market is overpriced and due for a major correction.

Is Elon Musk that charismatic con man whom we shouldn't invest in?  I know some of you think so; you've said so here in comments to other articles.  There's something behind the market's enchantment with Tesla and it's not the detailed financials.

Answering his own question: “When people realize that it’s a cash incinerating vanity project for Elon Musk, at a time when newer, better products are coming to the market. That point is coming soon. Very soon.”