An Introduction to Feedback Systems

I plan to talk more about technical topics in the coming weeks, and one of those topics that's worth covering is an introduction to Control Systems, commonly called Feedback and Control Systems.

I know that some of you are already really familiar with these things, in great and gory details.  Take the night off (unless you care to look for mistakes to correct).  For my career in radio design, I principally designed feedback and control systems like Frequency Synthesizers (Phase Locked Loops - PLLs), Automatic Gain Control (AGC) systems in receivers, Automatic Level Controls (ALC) for transmitters, and Cartesian Transmitter Linearizers.  For those of you who haven't looked into the subject, electrical engineering students take a class in control systems that tends to be a very analytical and very mathematical.  I'm going to skip the math and try to explain things in words.  I'll also be the first to say that when you design your 10th or 15th PLL or AGC, there's not much theory involved.  It's pretty much you just solve a few equations (which you've probably stuck in a spreadsheet or other software) and you're done.

For some folks, this is probably more confusing than helpful, so let's do a simple example of something that everyone knows: a thermostat in an air conditioner.  The thing we're controlling is the temperature at the thermostat, which we use as a proxy for the temperature everywhere under that air conditioning.  The feedback sampler is a thermocouple or something that measures the temperature - the equivalent of a thermometer.  The heart of the loop is that circle with an X in it, which acts to compare the "what we want it to be" (the thermostat setting) to "what we actually got".  It compares the two electrical signals and generates an error signal ("what we got" minus "what we wanted") that goes to something called the feedback controller here and that makes the feedback correction.  In a thermostat, this is an on/off switch.

It's important to notice that if the output is bigger than we wanted, the control system turns it down, and if it's smaller, the system turns it up.  Since the correction is opposite the measurement, this is called negative feedback.  If you think of the audio screams and howls that happen when a microphone is in front of a loudspeaker, there is no correction and the output gets louder until it can't go up any more.  This is a type of positive feedback, not a control system.  Perhaps you've heard of the term vicious cycle, where something happens and its result is to contribute to causing it again: that's a positive feedback situation.

There are much more elegant control systems available, and the smoothest response is generally the Proportional-Integral-Derivative or PID controller.   A PID controller calculates three quantities and then combines them to create the error correction needed.  Hopefully, this graph will help explain it while I add some words. 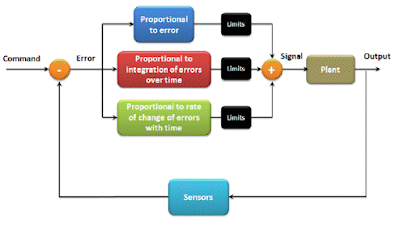 The drawback of PID systems is that they're complex and can be hard to get running well; in many cases, an error signal that's proportional to the error is all that's needed.  I don't recall ever seeing an AGC, PLL, ALC or any other electronic control system that used a PID controller.  On the other hand, this is something that the continuing advancement of electronics has vastly improved, and for some control tasks, like the temperature of furnace, kiln or for some operation, you can buy a preprogrammed, ready-to-use PID controller for well under $100, and sometimes under $20.

Proportional or PID systems are starting to make their way into air conditioners.  We have a Mini Split system in the workshop and it behaves that way.  Instead of the unit turning off when the temperature is cooler than the thermostat is set for, it cools at the lowest energy consumption it can.