A few weeks ago, when I wrote about the new Blade Runner 2049 movie, I emphasized the virtual world they created.


It may be the most visually stunning movie I've ever seen.  The design of the futuristic dystopian world they create is really incredible.  It's literally world creating, not set creating.  The sets - however much is CGI and how much is carpentry and paint I can't say - are simply amazing.

Today I stumbled across a bit more information on this.  The 3D CAD program I use the most, Rhino3D, has a user forum that I visit perhaps once a week.  Today, someone pointed out that in this video, there's evidence that Rhino was used in the creation of the world of Blade Runner.  Sure enough, there's a brief glimpse of a computer screen with program menus at 53 seconds in this video.  I doubt it lasts a half second.  It could well be Rhino, but I'm not familiar enough with other tools to know that it's the only program it could be.


Whether it's Rhino isn't the point of this post.  The point is a look behind the scenes at the utterly amazing models they built.  Then notice the sheer number of artists and model builders that they employed.  Notice their incredible attention to detail.  Not to mention the physical size of these models.  There's a spot in the video (around 3:10) where production manager Pamela Harvey-White says of one set of models, "they're "bigature", not miniature.  They're just massive buildings".

Honestly, I didn't know this sort of "movie magic" was still done these days.  I can never tell anymore whether I'm looking at actors in front of a green screen with everything drawn in around them, or how much of the set is really there.  I mean, if it's like Guardians of the Galaxy and someone is talking to Rocket the talking Racoon, that one's pretty obvious.  How much of the rest of the scene is there? 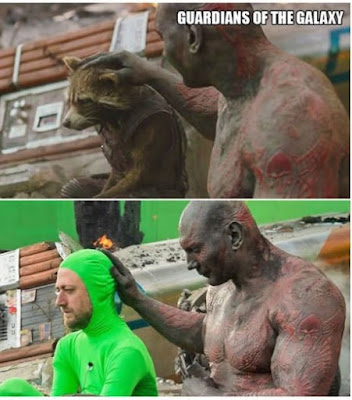 One of the commenters on the Rhino Forum says


Actors have a really hard time relating emotionally to a story in greenrooms, acting with placeholders in greensuits, so the trend is to let them have as much real scenery around them as possible. And the same goes for directors and photographers, it is much easier to be in the scene with a miniature as you can light it and tweak it hands on, instead of having to ask a “teenager” if “this” or “that” is possible.

Everyone talks about AI and Robots taking over everything, right?  Are they going to imagine scenes like these or the virtual world of Blade Runner?  I'll believe it when I see it.

So let me leave you with this fun fact: the actor in full body makeup with his hand on the greensuit guy sitting for Rocket is David Bautista.  He's in the opening scene of Blade Runner 2049.