The River of No Returns?

Most of you will recognize that as a common nickname for Amazon, the biggest online shopping force there is, for its history of raising stock price while never paying returns (dividends) to investors.  Full disclosure: I don't own Amazon stock, but I'm a Prime subscriber, which means it seems like a good enough deal to pay for.  At least for the last couple of years.  Whether or not that continues is a subject for another day.

One reason Amazon comes to mind this weekend is because while we took a look at Elon Musk's Tesla Motors and its financial woes Friday, we also hear that Jeff Bezos is the richest man in the world, thanks to Amazon stock holdings.  Today's news is that Jeff sold $1.1 Billion worth of stock yesterday; I guess he needed some new slipcovers for the couch or something.

It might be reasonable to ask exactly what Jeff Bezos has done for the world to warrant being the richest man.  Has he invented anything, developed a new drug, a new alloy, or something that makes life better?  Has he made life better by composing new music or created a new comedy?   Well... maybe he's helped make it more convenient in an era of decreasing leisure time.

Unlike Bill Gates, who was the wealthiest man for a long time, Bezos didn't really invent anything new that I can tell.  It has probably been over 30 years since Gates ever slung code, but he did at one time.  Microsoft has arguably created wealth in the sense that it created new products from the intellects of its engineers.  Think of developing code as refining ideas akin to refining ore out of the ground into metals.   Amazon, by contrast, has made shopping more convenient in some ways, and helped define ways that online shopping works, but their main product seems to be convenience.  A few months ago, Mrs. Graybeard and I needed a covered butter dish.  After forgetting it during a Walmart run, we added a "two-fer" pair of Rubbermaid butter dishes to an Amazon order for something else, knowing that because of our Prime membership we'd have them in a few days.  Instead, a small delivery service - probably formed for such contracts - laid them on our doorstep early on Sunday morning - two days later.

As equal time might warrant, after looking critically at Elon Musk my same source, Bill Bonner's Diary took a look at "The World's Favorite Stock".  Some of what he said surprised me.

It disguises the losses with low taxes, capital leases, and accounting tricks – but the losses are real… and unavoidable.

And since that business model requires super-low prices, there is no way for the company to fatten its margins. It can’t make up on volume what it loses on each sale.

In other words, the business model is a failure.

That is no sin… and perhaps no surprise; lots of businesses never make money.

But there is something about the Amazon phenomenon that is truly remarkable – like a plant that needs no light… or a mammal that needs no air.

Amazon is one of the strangest creatures ever to lurk in the capitalist ecosystem.

The second reason Amazon comes to mind is this article that a friend sent me from CNBC: "This 28 Year-Old's Company Makes Millions Buying from Walmart and Selling on Amazon".  To be honest, the fact that it was on Amazon and not eBay was the only thing that struck me about this.  He's doing things with Amazon that I had no idea were available options for a small business.

When 28-year-old Ryan Grant was at Winona State University in Minnesota, he came up with a side hustle to make ends meet.  Twice a year, he organized textbook buyback events on campus.  He listed the books on Amazon and shipped them out to customers around the country for a profit of up to $10,000 a year.  He could use an Amazon provided app to determine what to pay for the used books and list them for sale.  All fine.  The problem was it was very labor intensive packing and shipping books around the country.  The duplex he was renting was full of books and hard to walk around in.

Enter Amazon again.  Their fulfillment services meant Grant could ship all the books in bulk using preferred UPS rates to an Amazon warehouse, where, for a fee, the online retailer handled processing and shipping out each individual order. It made his side hustle more manageable, time-wise.

After graduating, Grant started working in accounting.  He eventually became discouraged with that career field and while trying to think about a new career got the idea to renew his side hustle, only this time with a bigger focus than just textbooks.


After work and on the weekends, he scoped out the clearance aisles at Walmart, scanned a few items using Amazon's app and bought up toys, games, and home improvement items he realized he could re-sell for a profit. A receipt from his early days shows a variety of purchases, everything from vacuums to Barbies, LEGO sets to stainless steel flatware.

The article goes on to describe how he turned part time work on the side, pocketing about $1000 per month quit his accounting job in 2013 and developed an $8 million/year business.


"I went from just me in this business doing around three-to-five thousand dollars in sales per month and now, four years later, we're a team of 11 and we're doing well over $200,000 in sales per month," Grant says. The team had to move to a warehouse that's over five times as large as their first this past July.

Since he started selling on Amazon, Grant says the business is on track to top $8 million in total sales by the end of this year. Profits are heavily reinvested back into the company, though Grant was still able to take a salary of around $150,000 when he was working for the venture full time. 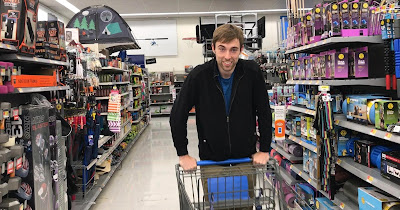 And more power to him.  I have absolutely no problem with someone buying at Walmart and selling on Amazon: willing buyers and sellers and all that.  If you shop around and buy it at what you think is the best price, why would you care if he's buying it on clearance and selling it for a profit?  It's especially ironic considering the online "e-tailer wars" between Walmart and Amazon.  It's no secret Walmart is trying to be the dominant e-tailer.  Walmart is trying to vanquish Amazon and hear the lamentations of their women.

As I said, the only thing about this that really surprised me is that the "side hustle business" was on Amazon and not eBay.  Over the years, eBay has turned from a place where people sell their leftover Beanie Babies or Pez dispensers (how it started) to a 24/7 flea market populated by a lot of small businesses.  Sure, you can buy someone's old Tee shirts, their ham rig, guitar, bicycle or what have you, but when you search listings, you find a lot of small businesses.  I think some buyers just prefer to buy from a shop over Some Dood selling his stuff.  We have known people who hustled around town to buy things and sell them on eBay.  On the other hand, we've bought some tools and other small things from an eBay seller after comparing them to Amazon or other suppliers we know and had the item arrive here in an Amazon fulfillment box.

How do these stories tie together?  Could it be that the most important thing Amazon has done is sell its fulfillment services and their app that helps find prices to help small business people figure out a market?