A World of Absurdities - Economic, That Is

One of the economics sites I read regularly is Mauldin Economics, by John Mauldin.  He was recommended to me first by a reader here, and my apologies for not remembering who you are.

John has been preparing for a big conference in Switzerland and this week's email, Bonfire of the Absurdities, is a summary of what he's presenting.  I really recommend you Read The Whole Thing.  As usual, I'm going run a few snippets to whet your appetite.  Mauldin looks at a handful of economic indicators and more or less echoes my observation: there isn't a week that goes by that something doesn't happen to make me say, "the whole world has gone completely FN".  He's a little more polite.

Let's start with a graph a lot of you have already seen: the Federal Reserve bank's assets as a percentage of GDP. 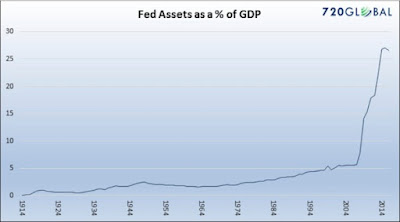 Things went a little wonky there, somewhere around 2008, no?  Over to Mauldin:


Not to put too fine a point on it, but this is bonkers. I understand that we were caught up in an unprecedented crisis back then, and I actually think QE1 was a reasonable and rational response; but QEs 2 and 3 were simply the Fed trying to manipulate the market. The Keynesian Fed economists who were dismissive of Reagan’s trickle-down theory still don’t appear to see the irony in the fact that they applied trickle-down monetary policy in the hope that by giving a boost to asset prices they would create wealth that would trickle down to the bottom 50% of the US population or to Main Street. It didn’t.

In other words, the Fed is as good at seeing the irony of what they do as Antifa.  The really absurd point here is that the Federal Reserve's assets are under 30% of GDP.  The European Central Bank and the Bank of Japan have both grown their balance sheets more than the US has. The Bank of Japan’s balance sheet is almost five times larger in proportion to GDP, and it's still growing.

As long as he's in Switzerland, he needs to show a little of their absurdities, too. The Swiss National Bank (SNB) is now the world’s largest hedge fund.


The SNB owns about $80 billion in US stocks today (June, 2017) and a guesstimated $20 billion or so in European stocks (this guess comes from my friend Grant Williams, so I will go with it).

They have bought roughly $17 billion worth of US stocks so far this year. And they have no formula; they are just trying to manage their currency.

Think about this for a moment: They have about $10,000 in US stocks on their books for every man, woman, and child in Switzerland, not to mention who knows how much in other assorted assets, all in the effort to keep a lid on what is still one of the most expensive currencies in the world.

And they're barely doing it.  If people deposit money in Swiss bonds, they don't earn yield, they pay for the privilege of losing money in Switzerland!  Switzerland is fighting a monstrous battle to keep their currency from going up.  Yet, that's still not the most absurd thing here.


Not coincidentally, European yields are at rock bottom, or actually below that, in negative territory. And what is even more absurd, European high-yield bonds, which in theory should carry much higher rates than US Treasury bonds, actually yield below them. Here’s a chart from old friend Tony Sagami: 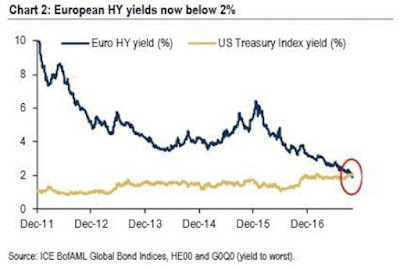 Interest rates are supposed to reflect risk. The greater the risk of default, the higher the rate, right? Yet here we see that European small-cap businesses are borrowing more cheaply than the world’s foremost nuclear-armed government can. That, my friends, is absurd.

Understand, the ECB is buying almost every major bond it can justify under its rules, which leaves “smaller” investors fewer choices, so they move to high-yield (junk), driving yields down. Ugh.

The common name for high-yield bonds is "junk bonds", because they have a high risk of default.  Here we find that European junk bonds, which (again) should have the highest yield, are earning less than US Treasuries.  (It doesn't say which term US Treasury, and there are many.  Sorry.)  Does this mean buyers think of the US as junk bonds?  Or do they not make the association and just go where they can get any yield?

Let me leave you with one other plot to get a feel for the absurdity.  This is the total US stock market cap to GDP.  It is now the second highest - at least in this 46 year plot - second only to the dot com bubble of the late 90s and much higher than the bubble that popped in '08.  Really, one good rally, an optimistic "we love 2017!" run up, could put us at the same levels as the dot com peak or beyond.  I wonder how that's going to work out. 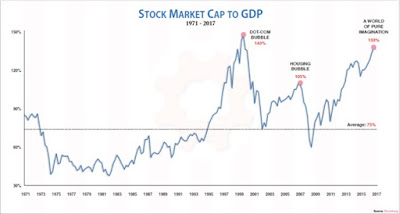 There's plenty of absurdity left, and lots of stuff to make you go "hmmm".  Go read.