In May of 2016, a Tesla car under "autopilot" control was involved in an accident that killed the person in the driver's seat.  Inevitably, whenever this accident is mentioned, someone feels the need to show up and say that no one is supposed to mistake autopilot for autonomous control.  If something goes wrong, the driver is responsible, not Tesla.  Nevertheless I find the accident instructive if we want to think about the kinds of problems autonomous cars need to get right all the time.


In that collision, which occurred at about 4:30 in the afternoon on a clear day, a truck turned left in front of the Tesla which didn't brake or attempt to slow down.  This is the kind of thing that happens every day to most drivers, right?  Should be a priority to program cars to not kill people in this sort of scenario.  The Tesla's optical sensors didn't detect the white truck against the bright sky, and its radar didn't react to it either.

The Tesla went under the truck, decapitating the driver, then drove off the road onto a field near the intersection.

It's not hard for a human with vision good enough to get a driver's license to see a truck against the sky background.  As I've said many times before, once a child knows the concept of "truck" and "sky" - age 3? - they're not going to mistake a truck for the sky or vice versa.


Tesla’s blog post followed by Elon Musk’s tweet give us a few clues as to what Tesla believes the radar saw. Tesla understands that vision system was blinded (the CMOS image sensor was seeing “the white side of the tractor trailer against a brightly lit sky”). Although the radar shouldn’t have had any problems detecting the trailer, Musk tweeted, “Radar tunes out what looks like an overhead road sign to avoid false braking events.'"

The way I interpret that statement is that in an effort to minimize the false/confusing returns the radar sees In Real Life (what radar guys call clutter), which is to say in an effort to simplify their signal processing, the radar antenna was positioned so that its "vision" didn't include the full side of the truck.  It shouldn't be impossible to distinguish a huge truck almost on top of the car from large street sign farther away, by the reflected signal and its timing.  Perhaps they could have worked at refining their signal processing a bit more and left the radar more able to process the return from the truck.  The optical sensors have the  rather common problem of being unable to recognize objects.  On the other hand, we've all had the experience of a reflection temporarily blinding us.  Maybe that's the sensor equivalent.

A recently created electronics industry website, Innovation Destination Auto, a spinoff of Electronic Design magazine, runs a survey article on automotive radars for the Advanced Driver Assistance System (ADAS) market.  There is a lot of work being done on radars for cars.  Radar systems for cars are nothing new; that has been going on for decades.  What's different this time is the emphasis on sensing the total environment around the car.

It's all about enabling the car to know everything going on around it, which it absolutely has to do.

Electronic devices such as millimeter-wave automotive radar systems are helping to evolve the automobile into a fully autonomous, self-driving vehicle. The Society of Automotive Engineers (SAE) International has actually defined six levels of driving automation, from level 0, with no automation, to level 5, with full automation and self-driving functionality. Different types of sensors within a car, including millimeter-wave radar transceivers, transmit beams of energy off different objects within their field of view, such as pedestrians or other cars, and detect the reflected returns from the illuminated objects. Sensor outputs are sent to one or more microprocessors to provide information about the driving environment for assistance with driving functions such as steering and braking to prevent collisions and accidents.

Multiple sensors are needed for 360-deg. detection around an ADAS automobile. Often, this involves sensors based on different forms of electromagnetic (EM) energy. Automotive radar sensors typically incorporate multiple transmitters and receivers to measure the range, angle, and velocity of objects in their field of view. Different types of radar systems, even different operating frequencies, have been used in ADAS systems, categorized as ultra-short-range-radar (USRR), short-range-radar (SRR), medium-range-radar (MRR), and long-range-radar (LRR) sensors or systems.

The article is "Sponsored By" Texas Instruments, among the largest semiconductor companies in the world, and links to some radar Systems On A Chip they've developed for the automotive market.

The different types of radar serve different purposes, such as USRR and SRR sensors for blind-spot-detection (BSD) and lane-change-assist (LCA) functions and longer range radars for autonomous emergency braking (AEB) and adaptive-cruise-control (ACC) systems. USRR and SRR sensors once typically operated within the 24-GHz frequency band, with MRR and LRR sensors in the 77-GHz millimeter-wave frequency range. Now, however, the frequency band from 76 to 81 GHz is typically used, due to the high resolution at those higher frequencies—even for shorter distance detection.

It seems to me that these are going to be fairly simple systems with low power transmitters and receivers.  Even the "LRR" (long-range-radar), shouldn't be too demanding on design.  There's a lot of variables I'm sweeping under the rug here, but a car needs to see a few hundred yards at most, and the demands on those radar transmitters and receivers don't strike me as being severe.

This is just the beginning.  Truly autonomous cars should probably communicate with each other to work out collision avoidance similar to how aircraft do.  It has been proposed.  It should be easier for cars.  Cars can stop.  Aircraft can't. 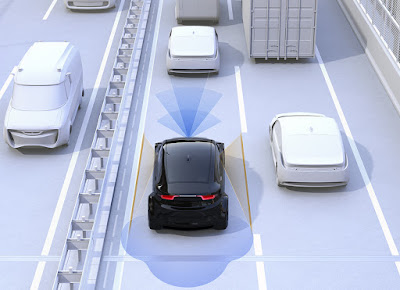 After the August eclipse, there were reports of horrific traffic jams in several places.  I know I posted about it, as did Karl Denninger and some other people.  What this means is that the road infrastructure is incapable of handling the traffic when it goes above some normal range.  I recall hearing that in a metropolitan area, like around Atlanta where there always seems to be trouble, adding lanes to the interstate costs millions per mile.  No sooner are the lanes built than more lanes are needed.  One of the attractions of autonomous cars is that they should be able to drive higher speeds in denser patterns, getting the effect of more carrying capacity in the highway without adding lanes.  Since they're all communicating with each other, chances of an accident should drop precipitously.  I think that's one reason the governments seem to be pushing for autonomous vehicles.