Is There a Future Role for Humanoid Robots

Remember Marilyn Monrobot and founder Heather Knight from back in 2011?  Dr. Knight believed that service robots which interacted with people would need to be humanoid, and if they needed to humanoid they would need to be more human and less creepy.  Her phrase was "Devilishly Charming Robots and Charismatic Machines," and she worked on social aspects; programming robots to interact more like people.  She even did a standup comedy shtick routine with a robot in which the robot adapted its jokes to the audience reactions.  Robotics researchers talk of something called "the uncanny valley":


Part of her mission is to address the so-called "uncanny valley" -- a moniker used by roboticists to describe the phenomenon wherein humanoid robots give the creeps to real humans (which most of you probably are).

Robots, of course, have been moving into industry since just about forever and I think no one ever uses the terms charming or charismatic for industrial robots.  Utilitarian at best.  Furthermore, more robots are coming.  According to the Boston Consulting Group, by 2025, robots will perform 25% of all labor tasks.  Robots are becoming better, more capable and cheaper.  The four industries leading the charge are computer and electronic products; electrical equipment and appliances; transportation equipment; and machinery. They will account for 75% of all robotic installations by 2025.

Machine Design presents this breakdown of the market:


In a recent report from Berg Insight, the service robot base is expected to install 264.3 million units by 2026. In 2016, 29.6 million service robots were installed worldwide. The robots in the service industry broke down into the following groups:
The remaining segments included humanoid robots (including assistant/companion robots), telepresence robots, powered human exoskeletons, surgical robots, and autonomous mobile robots. Combined, they were estimated to have had less than 50,000 units installed.

Humanoid robots, while being one of the smallest groups of service robots in the current market, have the greatest potential to become the industrial tool of the future. Companies like Softbank Robotics have created human-looking robots to be used as medical assistants and teaching aids. Currently, humanoid robots are excelling in the medical industry, especially as companion robots.  [Wait ... "milking robotic units"?... Robotic milking machines? ... Sometimes I wish I could draw cartoons - SiG]

One might ask why?  Why should humanoid robots take over in so much of the world?  In industrial design, it's often the case that "design for test" or "design for manufacturability" means spaces are left around connectors so people can fit their hands in there.  Entire "human engineering" (ergonomics) specifications exist with typical hand sizes, typical arm lengths, and so on, so that it can be worked on by humans.  We're not talking about how close the keys on a keypad are, that's for the users.  We're talking about how close the hardware is to other features inside the box, where users don't go. 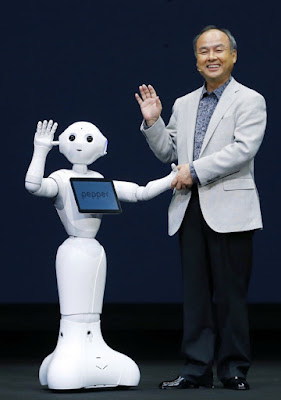 Softbank Robotics' sorta-humanoid robot Pepper  looks like something Dr. Knight would do (or research).  Pepper is far enough from looking human to be creepy.

If humans aren't going to work on the product, why design it around a human assembler?  Why not design the thing for the optimum size and internal functions and design a special robot to assemble it?  If the robot is going to do the work, it doesn't have to have human sized hands or look human. Witness the daVinci surgical robots, which certainly aren't humanoid.

On the other hand, if the human and the robot are going to be working side by side, that's the only reason to have the robot proportioned like a human.  Machine Design references Air Bus, saying they want to hand off some tasks that are currently done by humans to robots.


By using humanoid robots on aircraft assembly lines, Airbus looks to relieve human operators of some of the more laborious and dangerous tasks. The human employers could then concentrate on higher value tasks. The primary difficulty is the confined spaces these robots have to work in and being able to move without colliding with the surrounding objects.

A potential exception to that is the often-talked about use of humanoid robots as helpers for people with reduced mobility or other issues.  I don't think I care if the robot that picks me up out of bed 30 years from now looks particularly human, as long as it doesn't drop me.  On the other hand, there seems to be evidence that robots that look more human and capable of mimicking emotions can be useful with some patients.


University of Southern California Professor Maja Matarić has been pairing robots with patients since 2014. Her robots helped children with autism copy the motions of socially assistive robots and, in 2015, the robots assisted stroke recovery victims with upper extremity exercises. The patients were more responsive to the exercises when promoted and motivated by the robot.

While the number of humanoid robots needed will very likely be small, there's little doubt that the future is very bright for robot makers and the people who will program them.

A prototype assembler robot for Air Bus.  The ability to climb a ladder like that is important to them.