Imagine an Airplane With No Control Surfaces

That's the tantalizing idea now moving into real world testing at the University of Manchester in the UK.  The research is being backed by BAE Systems, the UK Defense company.

Let's back up for a moment.  Aircraft change their position in flight by changing the positions of various small surfaces primarily on the wings and the vertical stabilizer.  A "typical" configuration looks like this:

During the majority of the flight, the main things moving are the ailerons out on the wings and the rudder on the vertical stabilizer (what most people call the tail).  The flaps or slats extend backward and down or forward and down for additional lift at low speed, but the extra lift comes with the penalty of more drag at cruising speed - which is why they extend and retract - so they're used only during takeoff and landing.

The main drawback to all this is mechanical (or electrical) complexity which in turn brings maintenance and weight issues.  "Fly by wire", followed by "fly by light", are terms that come from replacing mechanical linkages; that is, cables on pulleys, first with electrically controlled activation of the surface, then with fiber optic command activation.  Instead, these researchers intend to control the aircraft by blowing air from the engine in the right directions and places


Magma Aviation Project is a new concept that will remove the complex moving parts, and reduce the weight and maintenance costs needed for aircraft to manipulate the air. As a result, aircraft will be able to travel quieter and more efficient. The project looks to accomplish this feat without any control surfaces—no ailerons, flaps, or tails.

Two key technologies allow the aircraft to manipulate air differently. First, the aircraft will have wing circulation control. This siphons the air from the aircraft’s jet engine and dispels it at supersonic speed through the trailing edge over the back of the wing, proving lift control. It eliminates the need for any mechanical moving surfaces. The second technological advantage is fluidic thrust vectoring. By using jets of air, the aircraft can deflect the exhaust and change the aircraft’s direction.

Clyde Warsop, Engineering Fellow here at BAE Systems, said: “The technologies we are developing with The University of Manchester will make it possible to design cheaper, higher performance, next generation aircraft.”

I was unable to find a better (bigger, more legible) version of the graphic from the original source Machine Design article  which describes what the system does. 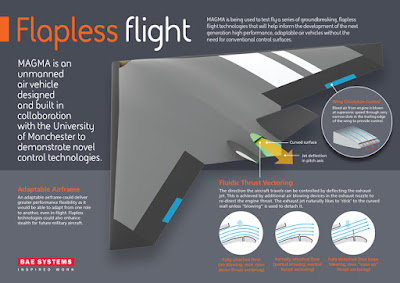 At this point, I can hear the pilots in our group saying "what happens if the engine dies?  Then you can't steer, you can't change attitude, you can't do anything".  That has to be a concern.  Mechanical control systems had redundant cables in case one broke.  Fly by wire systems are designed with redundancy and emergency back up systems to keep them available in case the power dies.  You'll rarely run across a group of people more interested in system integrity and redundancy hardware than pilots.  In this case, it looks like the aircraft designers and airframe owners might be really happy to save the size, weight, power and cost (SWAPC) of the current systems to go to this approach, but they aren't going to give up safety and redundancy.

It occurs to me that flaps are most needed during takeoff and landing, but during takeoff is a bad time to take some of the engine thrust to do anything else.  While commercial aircraft are rated to perform a safe takeoff and landing if one of their two engines dies at the worst moment, adding more thrust requirements for the tiny amount of time of takeoff might be the point of diminishing returns.