Back in October, I posted an article about a giant robot fight that was being staged for TV, and how it was getting close to the premise of the movie Real Steel.

If you'll recall, the fight had already happened and was going to be aired for the first time within days of that article.  Over a million viewers watched the live stream of the fight.  It has since been released to YouTube video (embedding disabled) mercifully with commercials edited out.  The whole video is 26:42 long, but has a few minutes of fight in it.  Fights start around the 7:15 and 13 minute marks respectively if you want to avoid a bit of the TV drama.  You should watch it in HD or fullscreen modes on YouTube.

Design News presents the video and some details from it.


The affair, which featured a few moments that felt scripted, was nothing even approaching the intensity of Voltron, Gundam, Robotech, or any other popular anime and cartoons that inspired the giant robot craze. It didn't even match the speed and pace of the average BattleBots match. It was certainly no Robot Sumo in terms of pacing. But let's be realistic, it probably was never meant to. And despite all of this there were still some entertaining moments to be found. They even got Mike Goldberg a professional mixed martial arts (MMA) commentator to lend color commentary to the matchup. 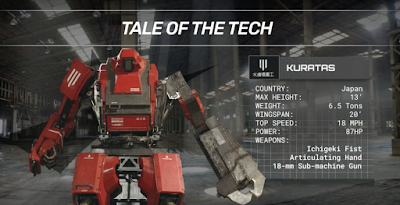 There are two fights, Kuratas against each American Robot.


MegaBots Inc. has always stated that its larger goal is to establish giant robot combat as a legitimate sports league. And while in part this battle with Suidobashi Heavy Industries showed that giant robot combat would definitely benefit from some rules and regulations (weight classes come to mind immediately) it also demonstrated there is a certain viability to the idea, provided the resources and budget are there. But who knows, if enough other groups get into the DIY giant robot game the tiny combatants on BattleBots could be facing some very large competition for the eyeballs of robot fight fans.