This month featured a story making news about cassette tapes making a comeback.  Most people think of the cassette as obsolete technology, and the last month also brought this joke: 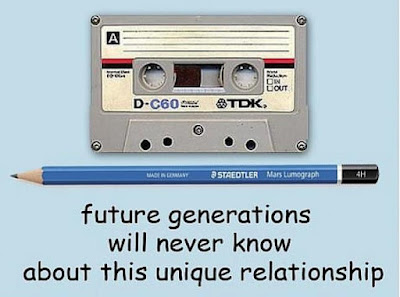 The comeback story is real.  This (self-starting) video tells the story of the National Audio Co. in Springfield, Mo., an American company at the heart of the story.  When music cassettes went away, they were largely producing voice tapes for the educational sector, and their business was steady.  Eventually, though, they noticed a problem.  Their sources were going away.


Experts from National Audio are developing new ways to make magnetic tape using rust and a 62-foot-long contraption that is normally used to create magnetic strips on credit cards, according to the Wall Street Journal story. [Note: paywall warning]

If production goes to plan, the machine should produce almost four miles of tape a minute by January.

Speaking to the Wall Street Journal, Stepp, said: 'The best tape ever made'.

It's not just tapes.  Vinyl records are making a comeback, too.  Digital Music News estimated the vinyl market at around $400 Million per year almost two years ago Accounting firm Deloitte says in a 2017 report that record manufacturers are set to generate $1 billion in revenue in 2017, a  growth rate over 100%.  Sales are mostly used albums because the record companies had stopped producing vinyl albums until a few years ago.  Today, smaller companies are looking at the technology again, and some are talking about extending it to "High Definition Vinyl".  The HD Vinyl developers talk about a vinyl record that has 30% more capacity, 30% greater volume, and double the audio fidelity of a typical LP sold today.


The ‘HD Vinyl’ name is a working title, though the basic idea is this: instead of the manual and time-consuming process currently used for creating vinyl LPs, the ‘HD Vinyl’ process involves 3D-based topographical mapping combined with laser inscription technology to more quickly generate a far superior product.  Not only will the end product be vastly improved, but the time required to produce the LPs will also be radically reduced.

The result is a record that looks like the LPs being sold today, and more importantly, plays like them.   According to the companies involved, the HD Vinyl disc will play on all currently manufactured turntables and high end record players, though enhanced features will be better realized on upcoming, HD-compatible turntables.  “This is a completely backwards-compatible technology,” said Guenter Loibl, Rebeat CEO.  “It will play on any existing turntable, you don’t need to buy a new system to enjoy the benefits.”

Of course, if you have vinyl, you need turntables, and the old giants of the field are still in the arena.  Witness the McIntosh MT5 turntable.

In the Christmas season of '15, Amazon's top-selling home audio product was a $50 Jentzen turntable.

If that doesn't convince you this trend is real, what if I told you that in 2015, Vinyl generated more revenue than YouTube, Vevo, SoundCloud and all the ad-supported, on-demand streaming services combined ?  The only thing missing would be to hear Taylor Swift is moving everything she records to vinyl - and owns the record company.

Remember Polaroid instant film cameras?  Polaroid has revived the idea with a digital camera that prints on paper, the Polaroid Snap.  According to Machine Design:


The Snap merges the digital age with the company’s classic instant dynamic. You can take a 10-megapixel full-color 2×3 image and save it internally, transfer it to PC, upload it to your social media platform of choice or print it out using Zink Holdings’ Zink Zero Ink Printing Technology (photo paper). The technology uses photo paper made from a composite material embedded with cyan, yellow, and magenta dye crystals. Printing the image is done by controlling a heat pulse, length, and intensity within the camera before it’s ejected.

Perhaps the strangest of these "rebirth of old technology" stories belongs to Kodak, who is bringing back the Super8 "home movie" camera of the '60s in a strange digital/film/video hybrid.


Kodak designed the Super 8 as a traditional video recorder that looks similar to the original but has a flip-out video display to see what you’re filming. Images are transferred to an 8mm film cartridge you pop inside the camera while recording. Once done, you mail the cartridges in to Kodak, which transfers them to digital files that can then be downloaded from the company’s website.

The camera also comes equipped with an internal SD card for recording audio (using an internal mic), as well as an HDMI port you can use to see the action on larger displays.

With the exception of recording the video to film that you send off for developing, it seems like any other video camera, and a large percentage of Americans carry one of those with them every day.

Machine Design tells the stories as part of the emerging small manufacturing sector in the US, but I see it as more than that, too.  Unless Kodak sold all of their manufacturing capability and is contracting it out, there's no way they can be considered a small manufacturer.  Same with Polaroid.  Still, just a bunch of cool stories out there for the interested.