While Fox news host Tucker Carlson is enjoying time off the air, presumably back after New Year's, last week he provided his Twitter followers with a list of One Hundred Racist Things.  If it ever appears to you that every day some idiot spokesperson somewhere comes forth with a declaration of something innocuous being racist, it's worth looking at this list.  We know it's an incomplete list because that link is to something racist that's not in the 100.  From a link to Vanderleun, who linked to Waka Waka Waka, which I must say is a place I've never seen before.  For your amusement, some of them...

About 1990, my project leader at Major Southeastern US Defense Contractor had a saying that has stuck with me.  When faced with illogic like this, he'd say, "there's just no arguing with that kind of logic".   Anyone who would think like that is immune to logic.  Which must mean I'm racist. 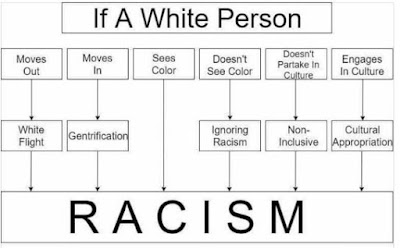 I got this graphic from a commenter to Tucker Carlson's original feed for the article.