Volcanoes Can Be Beautiful - From a Respectful Distance.

Today's emails brought a "year in review"-type article from a friend, but this one was a photo essay on "The Year in Volcanic Activity" over at The Atlantic.


While this has been a relatively average year for the world's active volcanoes, the activity that did take place was spectacular. Out of an estimated 1,500 active volcanoes, 50 or so erupt every year, spewing steam, ash, toxic gases, and lava. In 2017, erupting volcanoes included Shiveluch in Russia, Villarrica in Chile, Mount Sinabung and Mount Agung in Indonesia, Turrialba in Costa Rica, Piton de la Fournaise on Réunion Island, Kilauea on Hawaii, Popocatepetl and Volcán de Colima in Mexico, Bogoslof Volcano in Alaska, Manaro Voui in Vanuatu, Mount Etna in Sicily, and more. 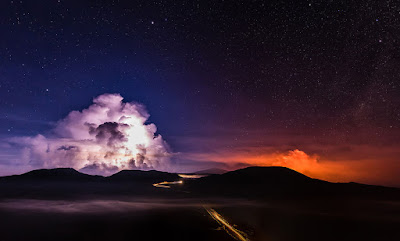 Piton de la Fournaise on Réunion Island, an "overseas department" of France in the Indian Ocean.  The long-time exposure shows both a lightning storm and the orange glow of molten lava from the volcano.  February 3, 2017.

Two views of Mt. Etna in Sicily, both are dated last February 28. 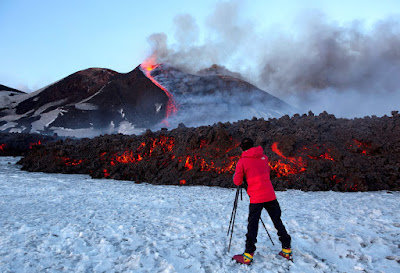 Daytime view from up close. 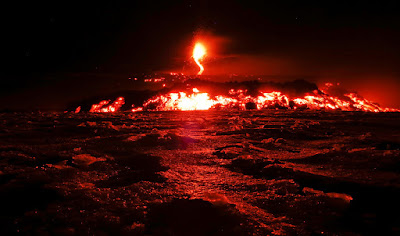 Nighttime view from a saner distance. You can see from the angle of the lava stream that the viewing angle isn't exactly the same, but it's the volcano and the cooling lava seen in the daytime shot.

There's a total of 40 photos.  Well worth your while if you like this topic.