I Wonder How The New Tax Law Affects This?

Interstate population migration.  A while back, I found this graphic from Business Insider: 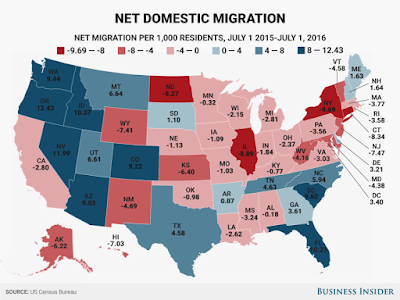 While other factors are involved, it's pretty clear that states with high tax rates like New York, Illinois, and New Jersey for instance were subject to a lot of movement into states with lower tax rates like Florida (no income tax, at least), Tennessee, Arizona and South Carolina, but there's other stuff going on here as well.  The entire Midwest had net outward migration, but so did New Mexico and the old deep south: Louisiana, Mississippi, and Alabama.  California only losing 2.8 people per thousand residents (PPT) surprised me.

This map was only for the period of July 1, '15 to July 1, '16, though.  Virginia lost 3 PPT but after Virginia (and the DC suburbs) already had become one of the richest areas in the country and before the Trumpening so probably not related to government.  North Dakota lost 8.27 PPT, which is a lot, but late 2015 was the time of the North Dakota oil bust.  In the broader sense the pattern of tracking highest tax rate states holds, though.  Between July 1, 2016, and July 1, 2017, nearly 450,000 people moved out of New York, Illinois and California.  That said, Oregon, Nevada, Colorado and and a few others surprise me.  Perhaps it's Californians moving someplace more like home than others, but

Hearing talk about the new Trump Tax Plan has gotten me thinking if we're likely to see more movement between states to reflect capping the tax deduction for state and local taxes at $10,000.  The lower cap will have the effect of making it mean more to middle income than high income taxpayers.  Obviously, if a family's SALT (State And Local Taxes) are under that limit, they have less incentive to move to escape the burden than a family that might owe quite a bit more than $20,000 in SALT.

Of course, something you'll never hear Chuckie Schumer, Nancy Peloski, Andrew Cujo or any other politician from a high tax state is that the rest of the country's taxpayers are subsidizing their spending by paying for the SALT deductions.  Florida and Texas taxpayers are paying for the mortgage interest deductions of people living in $750,000 dollar homes in California counties where that's the median house price.  We're all paying each other's taxes and not just our own.  There's no better argument for a flat tax/fair tax approach.

I have yet to come across anything of sufficient detail on the new Tax Cuts and Jobs Act that I feel comfortable commenting on it.  I've seen several apparently-trustworthy pieces that list "typical families' tax situations", but those are hard to digest.   See the Tax Foundation's analysis and another version from the Heritage Foundation.  It seems to me that cutting taxes while not creating "tax cuts for the rich", which is going to be the cry no matter the reality, is a tough needle to thread.  It seems like they did a pretty decent job of threading that needle.  Let's face it, the lowest 50% of incomes pay about 3% of federal income tax.  The rich pay the lion’s share of the tax burden, so they will see the largest dollar value in benefits.   I think the Heritage Foundation has a pretty good look at the truth in a piece on 5 Myths About Tax Reform and Why They're Wrong:


Myth 1: This is just a tax cut for the rich, and it will actually raise taxes for everyone else.

The truth is in fact the opposite. The Senate tax bill increases the amount of taxes paid by the rich and, according to the liberal Tax Policy Center, 93 percent of taxpayers would see a tax cut or no change in 2019. They found similar results for the House bill.

Both tax bills would actually increase the progressivity of the U.S. tax code. That means fewer people at the bottom will pay income taxes, and people at the top will see their share of taxes paid increase.

The Cato Institute’s Chris Edwards notes that the Senate tax bill cuts income taxes for people making $40,000 to $75,000 a year by about 37 percent. People making over a million dollars see a cut of only 6 percent.

In two recent Daily Signal pieces, we calculated how 12 different taxpayers would fare under each of the tax plans. The results show that almost everyone will see a tax cut, and only the wealthiest families are at risk of their taxes going up.

It seems to me this will lead to some movement across state lines, but it's hard to know if it will have the effect of making mass movements.  There could be an uptick in housing sales because of this law, though.