New Year's Eve is upon us, and I just want to wish all of you a happy New Year.

2017 was my second full year of retirement and was better in a couple of ways than the first year.  The biggest was that the year was free of medical issues like my emergency gall bladder surgery in June of '16.  It was largely a year of doing what we felt like doing - the privilege of retirement.  We took two vacation trips, one to South Dakota for a week with the kids and Precious Grand Daughter; the other to Tennessee to see the eclipse and they met us there.  We currently don't have anything planned for 2018, so it's getting to be time to plan something.

Retirement is a relatively new concept in society, at best a couple of hundred years old, and it's evident that society (in some sort of nebulous, society-at-large sense) is having troubles with it.  See "underfunded pension plans" with your favorite search engine.

I was looking at last year's blog entries to see what I was doing a year ago, and most of my posts were about completing the CNC conversion of my Grizzly G0704 - a year ago this weekend, I was completing the plumbing for the oiling system.  I also pointed out traps and tripwires that Obama was leaving for Trump.  We've encountered some of them as the year has gone by.

I had the mill built into a functional mill, completely under CNC control by February 2nd.  That quickly turned into a couple of months of tweaking and  improving.   First was reducing backlash on each of the axes, followed by completing an enclosure made from 12mm aluminum extrusion and plastic panels from the local Borg (mostly the blue Borg, not the orange).  And no, I don't know where that nickname comes from, other than I think it was the old Usenet newsgroups (kids, ask your parents).

I can't say I was done, because as recently as a few weeks ago, I talked about improvements to the rotary axis I originally added last May.  I can still think of things to do to improve its usability and user friendliness.  Then came adding an oiling system, fighting leaks until I went over to manual oiling, and finally adding a misting cooler.  It's probably best to never think of a project like this as done.

Then, of course, there was my "Son of Side Project".  Originally, Side Project was a joke because the project was putting a new side on the sawed away Breedlove guitar.  The original side was plastic left over from making the mill's enclosure.  Son of Side Project was a sequel to Side Project to replace the plastic with wood.  Now, it has a quilted maple side where the plastic was.  I gathered up the tools to do a setup on it this week and now it plays quite a bit better.  The guitar was most likely a Quality Control reject, so it needed lots of work.  The frets were uneven and had to be leveled with a file.  It probably needs some additional work.  I know the $8, eBay-special tuning machines I bought for it need to be replaced.

As far as projects with my CNC'ed, four-axis G0704 mill, I haven't accomplished much.  I built the GB-22 but never got it to function reliably.  It's still sitting as a "one of these days" project, in pieces.  I built the Little Machine Shop wobbler steam engine.  After drilling out the flywheel on my rotary table, I took the whole thing apart and put a shinier finish on all of the parts by lapping them on finer grits of sandpaper, and/or turning in the lathe's chuck.  Put it back together to find it doesn't run as reliably as it did.  I think I took too much mass out of the Flywheel.  I will turn a new one and get it back to where it was.

In addition to my ham radio antenna project, I have another electronics shop project, a box for a component called a variac.  This will allow me to put lower voltages on older vacuum tube equipment, at least while I get it running the first time. 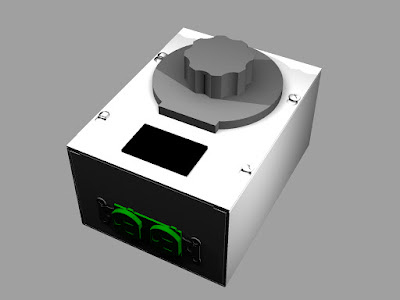 The black rectangle on the top is an AC voltmeter/ammeter like one of these and the AC outlet on the front is still under consideration.  This is going to be like my controller box for the CNC 704, with the panels laid out in Rhino3D CAD and cut out on the CNC mill.  This time it will be cut out on the big system, though.

Aside from those two, I'm looking at more projects for the metal shop, with fewer involving guitar resurrection.

Happy New Year!  Remember, if you drink, don't text and if you text, don't drive.  Or something like that.