I Have to Agree

Cartoonist Tom Stiglich makes a comment on New York's new law making abortion fully legal up until the moment a mother would give birth at a full term.  The law also removed requirements that a doctor perform the procedure opening the possibility it could be done by midwife or anyone convenient. 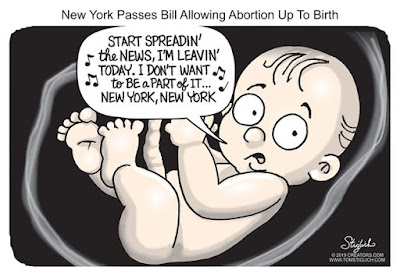 With all the cheerleading and enthusiasm in the coverage it's hard to get a succinct summary of what's in it.  The cheering is because New York's law used to end abortions at 24 weeks, and some news organizations just don't understand why anyone thinks this bill is anything but good.  The thing is, 24 weeks is more like the actual Roe vs Wade decision, which legalized abortion in the first trimester.  In general, the US is so far past Roe that we can't see it in the rear view mirror.  (We're also past what most other "enlightened" countries allow)   This summary from WQAD here:

“The old law had criminal penalties. It was written that the doctor or professional could be held criminally liable,” Cuomo said during an interview on WNYC Wednesday.

The law also addresses late-term abortions. Under New York’s Reproductive Health Act, they can be performed after 24 weeks if the fetus is not viable or when necessary to protect the life of the mother.

That OB/GYN in the first news article linked  above is not the first OB/GYN I've read who says there is no such thing as an abortion required in the final trimester to save the life of the mother.  Modern medicine is way past that.  The day after that law was passed, several commentators said that if a baby should survive an attempt at an abortion, rescue or resuscitation was not required.  The law allowed someone to simply kill the child.  .

Faced with this expansion of abortion up to the end of pregnancy (which will only be if the mother's health is endangered - including her mental attitude?) Virginia is apparently saying "hold ma beer" and working on a bill that goes farther.

From the Legal Insurrection Blog:


Tran’s legislation would have loosened rules on the legality of third-term abortion, which is currently only allowed if three doctors conclude a woman’s life or health is at a severe risk. Tran’s bill would have significantly lowered those standards, allowing third-trimester abortion on the advice of one doctor who could allow an abortion by certifying a pregnancy would “impair the mental or physical health of the woman.”

The bill would also loosen second-trimester abortion safeguards by doing away with the requirement that a state-licensed hospital performs them.

Virginia Governor Ralph Northam (D) is a big supporter, and most of the news I've heard today involve this rather shocking quote:

Legal Insurrection points out that Tran’s proposal is part of a nationwide push.  Democrats seem to be terrified that the Supreme Court may be turning away from them, and their highest priority seems to be to ensure abortions are still available.  Elected Democrats in several states including Rhode Island, Vermont, and New Mexico are pushing to make “the right” to get a late-term abortion much easier.  Of course, we've already seen New York is involved, too.

I've recently heard that since Roe, the US alone has had 60 million abortions.  Five dozen million children, grandchildren, nephews, nieces, cousins and others who never had a chance at their "right to life".  What a different place this country would be with them.  Remember when the rallying cry used to be "safe, legal and rare"?  That cry apparently went out the window years ago.

As Mark Steyn once put it, "If abortion were the respectable medical procedure its proponents insist it is, there would be no such thing as "Planned Parenthood", anymore than there is a Planned Hernia megacorp."  The fact there is a PP says there's something else going on.