A Couple of Florida Gunny Updates

It has been apparent for quite a while that the fight for gun rights is shifting to the states - where the officials can be bought for less and Bloomberg's money goes farther.  After the Fall Fiasco (what I'm calling the election) the one thing we knew for certain was that our new Agriculture Commissioner would be Nikki Fried; those of you from outside Florida may not realize this puts her in charge of the concealed weapons licensing in the state.  As I said at that time:


I honestly don't know if that's pronounced "Freed", like set free, or "Fried" like fried chicken.
...
All I really had against her could be summed up in a description that's easy to put together out of her campaign website: "she's a liberal, activist, big city lawyer".  In her campaign, Fried promised to make the focus of her administration pushing medical marijuana and opposing the NRA.

Both of her priorities are a wasted of taxpayer money.  I'm not sure how the secretary of agriculture has any say whatsoever over the medical marijuana industry.

Today I learned from The Truth About Guns (TTAG) that Fried has chosen anti-gun activist Mary Barzee Flores to be the actual Deputy Commissioner in that role.  Official press release here on the Department's web site. 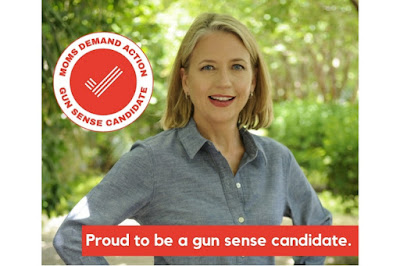 The photo, complete with the Demanding Mommies' logo and tagline, is from her 2018 (last fall's) campaign for the House of Representatives.  She campaigned on "taking on the NRA" (exactly what Fried said), closing the "gun show loophole" and all the other cliche's that the Demanding Mommies, Bloomy, and the other dependably uninformed groups all spread around.

So what?  How important is she?  Good question.  The actual laws that regulate the process are established.  It's true that the previous Ag Commissioner and Governor DeSantis' opponent in the primaries, Adam Putnam, did a lot to streamline the process and make it easier to get and renew your Florida concealed weapons license.  My guess on that it is if something is a department policy and not state law, it's easy for Flores to ignore it in an attempt to slow down licensing.  I can't see how she can create new laws to require things that currently aren't required, but I can see wait time stretching out, working hours for the department employees stretching out and more aggravation in the process.

On the other hand, without prior solid evidence to the contrary, I don't think it's a preordained conclusion that she'll follow the law in every detail.  She might welcome a fight with state Senate or House to try and get some Cred as being on Bloomie's side.


While on the topic of the state gun laws, I want to call your attention to two things on the blog of Jon Gutmacher, the Orlando Gun Lawyer and "the man who wrote the book" about Florida's gun laws.

First, Jon is starting to update the new laws in the state legislature and released his first summary of one yesterday.

Florida Statute 790.06(12) provides a list of places where carry per your CWL is not authorized. House Bill  6007 proposes to remove the language in subsection (13) about any college or university campus from the restriction on your CWL, and thereby authorizes it.  Thus, if passed, anyone with a valid CWL will be allowed to carry at a college or university campus.  But, you still can't open carry as that is prohibited by F.S. 790.053.

Second, last week Jon posted a call to sign up for an email from him as a sign to contact your legislators when he thinks it's important, good or bad.


To join just put "JOIN THE FIGHT"  in your subject line,  and email me at:  gutlaw@gmail.com.   I don't need or want any additional information, although adding a first and last name somewhere doesn't hurt.

Does contacting your representatives matter?  I don't know.  I think it's true that having more contacts is better than a one or two.  I asked him what he thought and he answered frankly.


emails don't do much other than when in large numbers give notice to legislators that it is in the public eye, and they probably then check the numbers as numbers.  Phone calls to staff are more important, and get lots more attention.  Again -- the more, the more attention paid.  Same with faxes - assuming anyone still has one.  Letters -- even more - but by the time they get there, the event is usually over,  and again -- a numbers game.   ten, twenty, thirty -- probably gets a sigh from staff, a hundred opens an eye or two,  a few hundred and up get noticed and usually action of some type.  But -- rarely are the numbers there.

So Jon isn't particularly sanguine about the prospects, but until the lead is really flying and everyone is openly talking about the ongoing Civil War, we've got to keep trying.  Doing nothing and throwing up your hands is a sure way to end up before the firing squad.  Or the wood chipper. 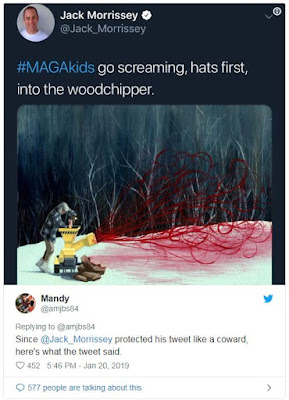 A tweet from Hollywood Producer Genocidal Jack Morrissey who thinks any children who disagree with him should  be shoved in a wood chipper alive - thanks to J. KB @ Gun Free Zone.