Almost five years ago, Airbus announced the Zephyr 8 electric drone for extended surveillance uses.  They've coined the term High Altitude Pseudo Satellite (HAPS) for the spindly-looking aircraft, intended to stay in the stratosphere for long periods of time.  As you might expect, the Zephyr 8 replaces their first development aircraft called the Zephyr 7, and development on that vehicle started in 2008.  The Zephyr 7 program successfully achieved several world records, including the longest flight duration without refuelling full 14 days, as well as very high altitude flights of 70,740ft.

Last July, the Zephyr (Airbus sites never use the "8") had its first test flight, starting on July 11 and completing virtually 26 days of flight (25 days, 23 hrs, and 57 mins).  The novelty is that the super lightweight (unmanned) aircraft uses photovoltaic cells and batteries to drive its two low power engines.  That means it should be able to fly for an essentially unlimited amount of time.  It flies well above the weather, even extremely intense thunderstorms ordinarily top out a few miles below 70,000 feet, so it can recharge all day then use the stored power overnight. 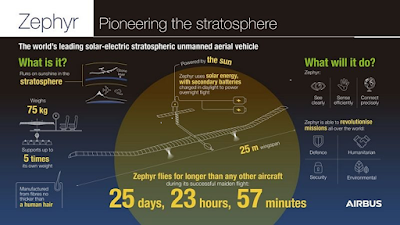 The Zephyr, with the persistence of a satellite and the flexibility of a UAV, flies in the stratosphere at an average altitude of 21 km/70,000 feet. The ultra-lightweight weighs just 75 kg/165 pounds and has a wingspan of 25 meters/82 feet (Fig. 2). Payload is approximately 2.5 kg (5.5 lb.). The only civil aircraft to operate at this altitude was the supersonic Concorde, and the military U2 and SR-71 Blackbird reconnaissance aircraft. The powerplant consists of two custom permanent-magnet synchronous motors rated at 0.60 hp (0.45 kW) each. [BOLD Added: SiG]

The batteries are the novel technology here, but don't seem to be "world beating" in specific energy, offering 435 Watt*hours per kilogram (Wh/kg).  Current best-in-class numbers I've heard of for lithium batteries run in the vicinity of 900 Wh/kg, but what can be done in the lab is different from what can be done in the highly conservative world that Airbus demands.


[T]he batteries, [are] provided by Amprius Inc. Their silicon-anode technology was originally developed at Stanford University and uses silicon nanowires in the negative side of a lithium-ion battery instead of the conventional carbon. (For more details on this technology, see “Stanford Start-Up Amprius Aims to Mass Produce High-Energy Lithium Ion Batteries” in Scientific American.)
...
(Amprius won’t divulge its Zephyr-related battery-capacity and weight numbers due to their “proprietary nature.”) [Note: edits in brackets [] by me - SiG] 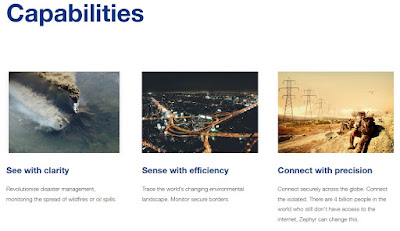 Airbus' sales page on the Zephyr includes some missions they foresee for the little aircraft.  With a payload of 5.5 pounds, it doesn't strike me as a particularly versatile aircraft, but I must be looking at this all wrong.  I can't imagine Airbus designing an aircraft without several target missions in mind, including the required payload and duration.