Another "That's Funny" About Radiation

Just about six years ago, I touched on the topic of radiation dosing and the effects of Chernobyl. The essence of that was the "no safe amount" dosage doctrine that's the official position of establishment science wasn't holding up well to examined conditions in the closed area.  Briefly,


If you believe no amount is tolerable, you have to ask yourself some tough questions.  Start with the fact that some places on earth have naturally occurring radioactivity at much greater than background levels.  Why doesn't life die off in these places - or have horrible cancer rates?  Colorado, with 15-20% higher natural radiation than surrounding states, has a lower cancer rate than the states with lower radiation.  When radioactivity was first discovered, all sorts of claims were made about radiation being good for you.  The claims resurface from time to time, here's one from 2002, but these claims get little traction in the general public.

Another one of those papers has surfaced.  Real Clear Science ran the article, "Was Low-Dose Radiation From the Atomic Bombs Beneficial?" before the end of 2018, summarizing results from an article published on 19 December 2018 in the journal Genes and Environment.  What I've read of that is fun reading.

The paper studies survivors of the Hiroshima and Nagasaki bombings and found they had lower mortality rates than people farther out who received less radiation.


Researcher Shizuyo Sutou of Shujitsu Women's University is the author of the paper. Sutou examined data from the Life Span Study, which has followed 120,000 survivors of the atomic bomb blasts since 1950. His analysis showed that survivors exposed to between 0.005 and 0.5 Grays of radiation had lower relative mortality than control subjects not exposed to atomic bomb radiation.

Sutou's finding is in line with the hormetic theory of radiation (hormesis), which states that very low doses of ionizing radiation might actually be beneficial, producing adaptive responses like stimulating the repair of DNA damage, removing aberrant cells via programmed cell death, and eliminating cancer cells through learned immunity.

Radiation hormesis is backed by a number of studies, but scoffed at by the establishment.  In that piece from six years ago, a couple of people left very interesting comments, including Mike Sivertson who left a really good introduction to the concept.


Radiation hormesis is backed by a number of studies, but it is currently not accepted by organizations like the National Academy of Sciences or United Nations Scientific Committee on the Effects of Atomic Radiation, which support the linear no-threshold (LNT) model of radiation protection. This model effectively states that any dose of ionizing radiation is harmful. Scientists like Carol Marcus, a Professor in Nuclear Medicine at UCLA, thinks this stance is overly cautious to the point of itself being hazardous. Irrational fear of radiation, no matter the amount, is counterproductive, she says.

"Forced evacuations in Fukushima have caused some 1600 premature deaths; forced evacuees from Chernobyl have a higher death rate than the 'babooshkas' who returned to the area despite government policy against it," she wrote, referencing studies suggesting that potentially unnecessary Fukushima evacuations disrupted healthcare services.

Hiroshima and Nagasaki are easier areas to analyze than Fukushima, as well as being easier to visualize.  The sources of radiation from the A-bombs were point sources which created an exposure that was over quickly compared to Chernobyl or Fukushima (itself a tiny fraction of Chernobyl), both of which went on for an extended time, spreading radiation over a wider area.  The model is easy to visualize.  Those closest to the blasts died instantly or almost instantly for those a little farther out.  Deaths further out were due to the radiation, particularly by damage to their immune system.  The low-dose survivors in this study were much further out than that. All of them lived because they weren't close enough to be killed.  The complication is that there appears to be a range of doses where lifespan went up instead of down.

I concluded that piece six years ago by saying, "The conclusion here isn't "Chernobyl Was Good!" ".  We can substitute "the conclusion here isn't that dropping atomic bombs was good".  I just see evidence that our body's homeostasis systems that keep us normal despite everything that happens to us deal with radiation better than the linear no-threshold LNT says.  I see that, perhaps, the persistent low level radiation leads to some sort of adaptation.  It that makes me think the LNT model of radiation protection is not well-supported by evidence.

It's admittedly hard to study in a controlled environment because it would be unethical to dose people with radiation without knowing how much is harmful or how much is beneficial.  Population association studies like this one (and like the vast majority of epidemiological studies) are the only way to keep getting data. 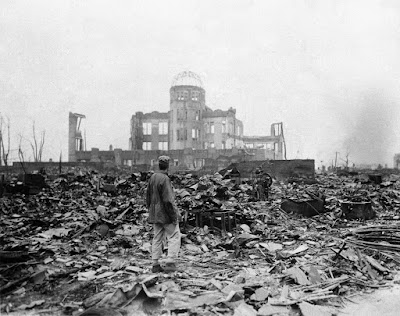 "Offered for your consideration".