One of the most deeply held ideas in most people is a dread of radiation.  Radiation is always to be avoided.  There is no safe dosage.  Any level will eventually kill you.

In toxicology, there's a saying that "the dose makes the poison", and anything can be toxic if the dose is big enough.  Oxygen is quite poisonous if the partial pressure of oxygen in the gas you're breathing is above 3 atmospheres - only a concern to scuba divers.  Water will kill you if you drink enough to drop the concentrations of some ions in your blood too low.  There is no doubt that really high levels of radiation are quite good at killing; they use it to kill cancer.  There is no doubt that lower levels - to some point - can cause cancers and birth defects.  It's lower levels, between background and these toxic levels that are the question.

If you believe no amount is tolerable, you have to ask yourself some tough questions.  Start with the fact that some places on earth have naturally occurring radioactivity at much greater than background levels.  Why doesn't life die off in these places - or have horrible cancer rates?  Colorado, with 15-20% higher natural radiation than surrounding states, has a lower cancer rate than the states with lower radiation.  When radioactivity was first discovered, all sorts of claims were made about radiation being good for you.  The claims resurface from time to time, here's one from 2002, but these claims get little traction in the general public.

When the reactors at Chernobyl melted down in 1986, and the immediate crisis was over, the governments of Belarus and the Ukraine together created an exclusion zone around the nuclear plant.  It has become an oasis of wildlife that is surprising those who go there.  In Slate (of all places) we find an article on the place by author Mary Mycio.


The explosion and fire here spewed the equivalent of at least 20 Hiroshima bombs’ worth of radiation, mostly within about 25 miles of the reactor building. The most radioactive isotopes have long since decayed, and rain has washed the rest into the soil and the food chain. Two of the most persistent isotopes are cesium-137, which chemically mimics potassium, and strontium-90, which imitates calcium in living things. As these isotopes have been taken up by plants, animals, fungi, and bacteria, radioactivity is no longer on the zone, but of it.

This is a unique ecosystem, twice the size of Rhode Island and about evenly divided between Belarus and Ukraine. A generation after most humans abandoned the area, forests and wetlands have consumed once-tended fields, villages, and towns. Only the occasional carcasses of crumbling buildings mutely testify to the former occupants.

It's a mixture of good and bad news.  The area had been mostly devoid of large mammals - deer, moose, wolves, lynx - which had been displaced by the Soviet pine plantations and farms.  They returned almost immediately.  On the other hand, animals adapted to living off humans - pigeons, rodents - experienced decline. Mycio writes:


Of the dozen moose sightings I’ve had in my lifetime, all were in the exclusion zone, where in the course of many journeys I’ve spent more than a month’s time researching my book Wormwood Forest: A Natural History of Chernobyl. It’s a strange and beautiful place where I’ve spotted wolves in broad daylight; lynx tracks in the snow; and huge herds of boar, roe deer, and elk. I’m still drawn back.

To be sure, there were deadly levels of radiation there.  A whole forest turned red when the radiation killed the chlorophyll in the plants, taking away the leaves.  The Red Forest is still a freakish looking place, but normal, green plants are returning.  To be sure, some animals were freakishly mutated - but they either simply died, unable to survive, or were eaten.  That phase of the disaster appears to be over.  Even animals being found with radiation levels in their tissues far above normal limits appear to be healthy and surviving well in the area. 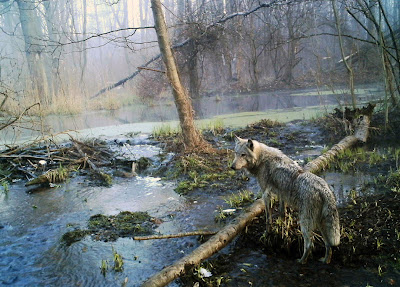 (wolf in a Chernobyl bog)
Many people have heard of the Ukrainian girl who rode her motorcycle through the area many times taking photographs, Kid of Speed  There's a thread online that this is a faked story - but even those seem to say that the pictures are real and the places are real, just that she didn't ride her motorcycle.  I really don't care if she was in a car, bus, or on a motorcycle. I don't know if it's fake or not.

The conclusion here isn't "Chernobyl Was Good!".  It's that, perhaps, an area like this doesn't need to be abandoned for thousands of years.  That, perhaps, the environment has a tendency to correct itself like your body's homeostasis systems that keep you normal despite everything that happens in and to you.  That, perhaps, the persistent low level radiation leads to some sort of adaptation.  I just present it as an interesting read.