Chances are you've heard this already, but the DC Attorney General has decided not to charge David Gregory with violating the city's laws against simple possession of a 30 round magazine.  See David Gregory is more important than a mere commoner, and as such is automatically considered not to be a threat. 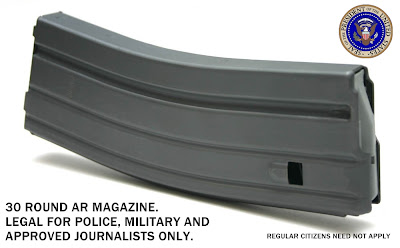 
Irvin Nathan, the attorney general for the District of Columbia, announced Friday that he will not press charges against NBC News’ David Gregory nor any employee of the broadcast network for violating the city’s gun laws. Violation of the city's firearms laws carry a maximum $1,000 fine and one year in jail.

Mr. Nathan wrote to an attorney representing Mr. Gregory and NBC News, Lee Levine of Levine Sullivan Koch & Schulz, LLP, that, “OAG has made this determination, despite the clarity of the violation of this important law, because under all of the circumstances here a prosecution would not promote public safety in the District of Columbia nor serve the best interests of the people of the District to whom this office owes its trust.”

So there you go: prosecuting the press is not in the public's interest.  He possessed the magazine, but he didn't possess it possess it, you know?  It's not because it wasn't pre-meditated; NBC called the DC police to ask how to do this legally and were told they couldn't, so it was pre-meditated as hell. It's because there was no evil intent, right?  Nope.

Because Army Veteran James Brinkley certainly had no evil intent and tried to do everything right when he transported a standard 15 round magazine for his Glock and was imprisoned - standard magazines are considered high capacity in DC.  He was going to a range to practice for an employment test for the US Marshall's Service.


...Just like Mr. Gregory, Mr. Brinkley called MPD in advance for guidance on how he could do this legally. Mr. Brinkley was told that the gun had to be unloaded and locked in the trunk, and he couldn’t park the car and walk around.

Unlike Mr. Gregory, Mr. Brinkley followed the police orders by placing his Glock 22 in a box with a big padlock in the trunk of his Dodge Charger. The two ordinary, 15-round magazines were not in the gun, and he did not have any ammunition with him.

As Emily Miller puts it:


Mr. Brinkley was publicly humiliated, thrown in jail and forced to spend money to defend himself for violating a law that millions of viewers watched the NBC anchor violate. If D.C. is going to have this pointless law, it should at least be enforced fairly.

I can't say this wasn't as predictable as the summer rains around here, but it sure would have been nice if the press was held to the same standards as the hoi polloi.   It's a shining example of why regular people think folks like the DC Attorney General, and all of the self-anointed "ruling class" regard themselves as simply better than us.  They don't have to worry about fairness, or even the appearance of fairness.  They're just simply better than us.  They are our philosopher kings.

Wouldn't it be nice if, even just once, in a situation like this, someone did the right thing?