Cold Fury called it "New York Rescinds Second Amendment" and links to Bob Owens who writes "Are There Free Man Still Alive in New York".  The New York law that was just rammed through the state legislature has many of the features of Feinstein's proposed AWB that we're believing hoping won't make it through the congress.  Text of the law is here.  Some highlights
It goes on and on.  Bob Owens says:


New Yorkers have a choice. They can either comply to the demands of their would-be masters, quietly become criminals and hope they don’t get caught acting like free men, or they can fight this abject insanity.

As New York state has no constitutional protections, they must either appeal these laws to a federal judge and up the line to the United States Supreme court years from now, or resolve to take down this draconian law through subversive means.

Civil disobedience is a great start.

You’d be amazed how few transportation arteries their are into New York City, and how easy it would be to turn the city upside down with a few dozen vehicles suffering concurrent “mechanical problems” on bridges and in tunnels during the morning rush hour. This is just one off-the-cuff idea. There are thousands of things you can do to make this totalitarian state falter. Crush Albany’s wallet, and force them to repeal this ill-advised law.

As in all cases where they try to outlaw a thing based on fear, they will just change the market.  If you're only allowed seven rounds in a magazine look for people to switch from smaller to larger calibers to be more effective.  Instead of .380 and 9mm, I expect people will switch to .40 or .45.  The new little Springfield XDs .45 handgun, for example, has a five round magazine, so it's NY compliant - I think.  I can see single stack 1911s in .45, like this Springfield Armory MilSpec 1911 which comes with a seven round magazine, becoming big sellers in New York.

Since revolvers don't have magazines, and aren't mentioned in this new law, you might see more .357 Magnum, .44, and bigger bore revolvers. These are a little hard to conceal, unless you're an NFL Tackle, but fully compliant with the new law. 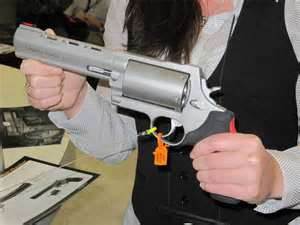 A 50 cal revolver.  Somehow, I don't think this is quite what the panty-sh**ing legislators in New York were envisioning.