Leave it to the Times

The New York Times lost all credibility with me ages ago.  Every so often I'll see a conservative commentator say that something published in the Times justifies their view, and I want to agree - but then that's sloppy thinking, and I hate sloppy thinking.  Murray Gell-Mann, Nobel prize winning physicist, coined a term about temporary amnesia while reading papers, which is now called Gell-Mann amnesia.  The idea is that you read an article in the paper about something you know a lot about and you say to yourself, "What a piece of crap!  This paper isn't good enough for wrapping dead fish!", then you turn the page and read an article on something you don't know about and just accept what they said, as if they're always credible.  In fact, they're probably just as wrong on this as they were on the thing you know about.

My son emailed me this link to an article in the NYT in answer to the "more guns, less crime" view I express all the time.   The article is called "More Guns = More Killing" and I don't recommend you read it, unless you want to find the holes in it.  In true NYT fashion, they assert a lot of things as true just because they say so, or under appeal to authority.  For example,


After a gruesome mass murder in 1996 provoked public outrage, Australia enacted stricter gun laws, including a 28-day waiting period before purchase and a ban on semiautomatic weapons. Before then, Australia had averaged one mass shooting a year. Since, rates of both homicide and suicide have dropped 50 percent, and there have been no mass killings, said Ms. Peters, who lobbied for the legislation.(emphasis added by me)

But we in the community know that's not true.  The Brookings Institution said,


...homicides “continued a modest decline” since 1997. They concluded that the impact of the National Firearms Agreement was “relatively small,” with the daily rate of firearms homicides declining 3.2%.”

Suicides with firearms went down but suicides by other means went up.

And, of course, in England the results have been considerably worse.  Handgun crime has doubled, and the UK now has more violent crime than South Africa, the US and most of the EU..


Scientific studies have consistently found that places with more guns have more violent deaths, both homicides and suicides. Women and children are more likely to die if there’s a gun in the house. The more guns in an area, the higher the local suicide rates. “Generally, if you live in a civilized society, more guns mean more death,” said David Hemenway, director of the Harvard Injury Control Research Center. “There is no evidence that having more guns reduces crime. None at all.” (emphasis added by me)

which pretty much conflicts with what we know about Switzerland, not to mention all of the excellent work done by John Lott and others here in the states.

I don't know how valuable this sort of comparison would be under any circumstances, even without the logical and argumentative flaws in this piece.  Once you get out of the tourist zones, much of Latin America is not a nice place, and the culture there is very different from the US culture.  I'm especially inclined to dismiss cross-cultural studies just because there are so many confounding variables.  It would be like saying Fallujah is more dangerous than the US, and it's because of the guns, while ignoring the influence of Al Qaeda, the war going on there, the differences between a Muslim country and the US and about a hundred other things.  Although I'm not sure how much more dangerous Fallujah is than Chicago. 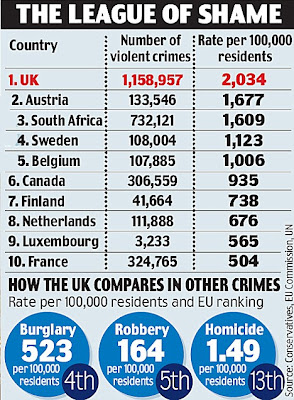 And if you read that Times article and have good solid sources for debunking it, please post them in a comment for everyone here to see.