I Know This Isn't Really Important...

Lance Armstrong, you are dead to me. 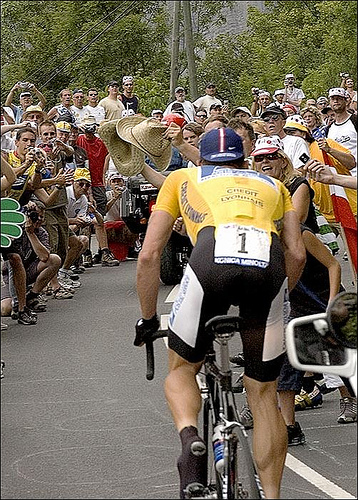 The time trial up L'Alpe d'Huez, 2004.  I was watching that day, and, basically every stage of every Tour de France that Lance rode in, if it was televised.  I had a US Postal Tee shirt, and sent money to Livestrong.  Sucker.  (I may have bought a Tee shirt, but I never went for the full "kit" - a USPS jersey and bike shorts - let alone the Trek USPS bike - I may be crazy but I'm not insane).

We bought into the hype and the story.  In 1997, the year after Armstrong's bout with cancer, Mrs. Graybeard was battling cancer.  We were dedicated cyclists; it seems inevitable and natural we follow Lance.  As someone had put it, Armstrong became an ambassador of hope.  Maybe he didn't even really intend to, but after "the book" he became the symbol of hope to millions of Americans going through cancer treatments.  People would hang their fears on his powerful, gaunt body and watch him scale mountains.  You'd see pictures like this one in oncologists' chemotherapy rooms all over America - probably all over the world.  We wanted to believe - and it was an easy story to fall for.  A guy stricken with the most feared disease, beats it, then goes on to win the most grueling event in sports, faster time trialing and better climbing than anyone alive.  If he was stronger than his rivals, like Jan Ullrich, and able to climb better, it was because he trained harder.  Having gone through the agonies of chemo and surgeries, it was easy to believe the perspective helped him to endure more pain.  While Jan could train hard, Lance could turn himself inside out with pain, and be just that much better.

What a pile of crap.

When Jan Ullrich was busted for doping, he said something to the effect that if Armstrong could beat him when he was doping, he knew Armstrong absolutely had to be doping.  We idiots said, "he's just a genetic freak - there has to be one on the planet who can do it".  Chris Carmichael, Lance's coach just said, "At that level, they're all genetic freaks".  The clues were all around.  But, still, he never failed a drug test.  Being a professional cyclist meant they'd come to his house on random mornings for screenings.  Being a stage leader in le Tour means you get tested every day, as well as the random testings.

So it turns out, he was not only the biggest fraud in sports, but a terrible excuse for a man.  He not only lied about what he was doing, he viciously attacked other guys - former teammates and friends - who told the truth about him.  A despicable, pathetic man.  You know what the ironic part is?  I'll take odds the hormones and stuff he was taking either gave him the testicular cancer that made him famous, or made it much worse.

You may have also noticed that although all seven Tour titles were stripped, not one of them has been re-awarded to the second place riders.  They have all been stripped for doping, too.

Lance, you are dead to me.  And I think professional cycling is, too.