That's the title of a thought provoking piece on The Street Standards back on 12/12.  If you don't know the blog, as I didn't, the author is Ralph Mroz, and according to his "About This Blog" page, he writes from the standpoint of having been involved in training for over 20 years.


I’ve been training in the self-defense disciplines for some time, writing about them for the major firearms and law enforcement  magazines since 1994, and even teaching them a bit at international law enforcement conferences.  I am the principal presenter in many of the Armed Response DVDs, and many of the video programs of the Police Officers Safety Association (I have no association with nor financial interest in either today).  My Paladin Press books are still, I think, largely  relevant and now free downloads here.  A position as a writer afforded me the opportunity to meet, train with, and pick the brains of many of the top people in the field.

Hat tip for the link to this blog post is to Michael Bane's Down Range Radio podcast, which I've been listening to for a long time - maybe the first podcast I ever listened to.  I recall listening to it on my October 2010 trip to Salt Lake City and was a regular listener then.  I'm not sure which episode it was, but somewhere from 601 to 603 and I think it was 601.

Now an instructor telling you not to practice shooting is more than a little strange, and Mroz conditions that recommendation by saying he's assuming you can already shoot reasonably well, where "reasonably well" is not defined as being "being able to put a full magazine into a half-dollar at ten yards at .20 splits".   It's just that in his view, and that of others he calls up for backup, American shooters prefer to train in shooting because that's the easy and fun part of all the training someone carrying for self defense should prepare for.  He makes a couple of points I found to be very impressive.

In the last month or so we've had more than one story where the "Good guy with a gun" was killed by police responding to an incident.  Around Thanksgiving, Hoover, Alabama police shot and killed Emantic Fitzgerald Bradford Jr., who was in the mall and allegedly with a gun in his hand.  Mroz says part of his motivation for the thoughts that led to the post was the December 6th shooting of 73 year old Vietnam vet Richard Black.  Black very appropriately shot a bad guy who had broken into his home and was trying to drown his grandson.  When responding Aurora, Colorado officers ordered him to drop his gun and he didn't, officers killed him.


In discussing this story with Marcus Wynne* he said (among other things): Some of my previous students in South Africa observed that American tactical training is for the most part not taken seriously in South Africa because we [Americans] focus too much on one tiny piece of the total problem.  I should note here that they have real crime in SA: real, violent, regular crime.

From here, Mroz goes into this paragraph, followed by a list of 25 things we need to know or at least thought of and prepared for if we should ever have to pull that gun.  I'm going to list a few to give you a flavor of it, but as always, RTWT.


So, instead of doing the easy thing and buying another gun, or doing the fun thing and blasting away to shave a tenth off your splits, lets see what falls out from considering the (chronological) elements involved in surviving a violent attack:

1. You have to be focused enough to avoid potentially bad places, events, etc.
2. You have to have a gun with you.
3. You have to be aware enough of your surroundings to notice that something isn’t right.
4. You have to assess what’s not right to determine if it’s a threat.
5. You have to – in real time – decide if it’s a deadly force threat.
6. You have to act on the threat.  Most people freeze or don’t believe what’s actually happening.  You have to employ appropriate tactics such as moving, sheltering a loved one, etc.  Of course you have to be aware of your environment to make the best  choice here (see 1. above).
...
13. If you have to shoot, you have to hit the BG, preferably COM.
...
15. You have to communicate effectively with the now-shocked/hysterical bystanders to keep them safe, let them know what just happened, and make it clear that you – the guy that just shot someone – is in fact a good guy.
16. You have to get yourself and loved ones to safety.
...
22. You have to call your lawyer. Do you know who’ll you’ll call? Bail will come later.
23. You have to call your spouse, partner, parents, whomever, if they aren’t with you to let them know you’re OK and won’t be home for dinner. Or maybe for a few days. And to let them know that the press will soon be pounding on their door. And how to handle that, if you haven’t already discussed it.

I think it's entirely appropriate to copy down this entire list of 25 things, print it out, and seriously contemplate them.  Engineering nerd talking:  maybe list in a spreadsheet so you can score how complete you think you are, list if there's something you need to do and figure out when you're going to do it.


And yet, almost all American training focuses only on element 13.  That is, one out of 25+ things you need to be competent at to truly survive a violent encounter.  This out-of-whackedness has only gotten worse over the last 20 years.  One of the pioneers of civilian deadly-force encounter training, Massad Ayoob, did (and still does) teach almost all of these elements in his flagship course.  But almost no one else does, certainly not the plethora of young “trainers” these days with no real-world experience at all.  They can shoot (in some cases), but they aren’t teaching you how to survive: they don’t know how to; they don’t even realize that they aren’t.
...
So why do we (Americans) focus almost exclusively on just shooting? I submit it’s because, unlike our South African friends, the high level of safety in most of our country allows us to get away with it.

It's an interesting read.  Perhaps the most interesting aspect is that Marcus Wynne commented on the post, adding more content to all 25 lines and telling some stories from his time in South Africa.  (If you follow the link to his blog, you'll find he's a writer now.)

I've copied the 25 items into a Word document and am going to do what I said above.  Print it out, keep it somewhere prominent, and give it some time.  Yeah, a spreadsheet will probably be involved.  I'm not saying to cancel your "Tactical handgun 12" class, or give that sort of practice up.  There's nothing wrong with training to shoot more accurately faster, and there's nothing wrong with working on the skills of a competition shooter, but these things Ralph Mroz outlines need to be addressed, too. 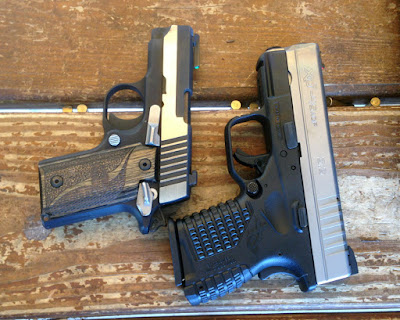