There's a wonderful quote attributed to Thomas Sowell that says, "It is usually futile to try to talk facts and analysis to people who are enjoying a sense of moral superiority in their ignorance".

Despite the warning from the obvious genius of Dr. Sowell, I'm going to try to present facts and analysis for AOC, Bernie, and all of the idiots running around now saying we need to have a nationalized healthcare system like those other countries.  Perhaps you have friends or family members who are parroting the same lines and this will be useful to you.

We already know it will fail because it is currently failing in every single country that has it.

This is drawn from an article by author Jim Kelly at FEE (Foundation for Economic Education) called "How We Know Single-Payer Won't Lower Health Care Costs" and it's in the format of four questions for anyone advocating for this.

Let's start at the top.  Bernie and the Bunch say we'll save money because the government doesn't have to make those awful profits that insurance companies make.  Bernie says we'll lower costs 20%, others have gone as high as saving 60%.  This is really easy to dispel because all of those insurance company financial annual reports are available.  As Kelly puts it:


Unfortunately, outrage buys fewer tongue depressors than one might hope. The top health insurers averaged 4.1 percent profit in 2017 (per Yahoo Finance). That’s taken on half (at most) of spending for-profit insurers handle. Eliminating those profits would save about 2 percent. Since health care gets 4.5 percent more expensive every year, that would in effect roll prices back to last August.

The advocates say that we'll be able to negotiate better deals with pharmaceutical companies.  Maybe, like President Trump says, they're all awfully crappy negotiators now because Medicare is already the largest single-payer system in the world, and if they can't get a better deal now why should we think they'll negotiate better in the future?  That's an argument against Medicare for all, not for it.

What exactly has the Federal Government ever taken over and reduced costs over time?  Not education. Not defense. Not police and fire protection.

In what country is single-payer making health care cheaper from one year to the next?  Not one.of the 36. 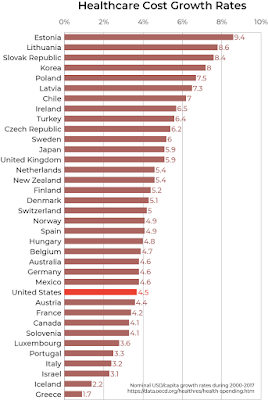 Not to insult any of my dear readers, but if healthcare costs were going down, the growth rate would be negative and there's not one negative growth rate on this chart, which includes the UK's National Health Service, Canada and other places always put up as a paragon we should try to reach.  In fact, the US has a cost growth rate in the lowest third of all 36 countries.

Which says if we were to go to single-payer and even held costs down at the average rate, our costs would go up not down.

Granted that the first few years of the NHS in the aftermath of WWII were abnormal in the UK (and much of the world), but ...


In the first year, it spent 32 times what it had planned for eyeglasses. It had to raise salaries to attract more nurses. Prime Minister Clement Attlee pleaded over the radio with citizens not to overburden the system.

In the early days, prescription drug volume tripled and was threatening to collapse the system.  They had to start adding charges for prescriptions, which helped reduce the explosive growth, but over the last 68 years, their costs have gone up an average of 4% per year.

Let's assume there is still some waste in the medical industry.  The thin profits the insurance companies are making seem to be a reasonable indicator that there's not much waste.


Less than a dime of every health care dollar gets distributed to someone as profit. The great majority goes into someone’s paycheck—maybe a nurse, maybe an advertising copywriter, maybe an IT guy at the FDA. Health care is 18 percent of the US economy, which means 30 million of the country’s 165 million jobs.

Any health care reform that has us put fewer dollars in means fewer dollars out to all those people. For costs to halve, 14 million people need to lose their jobs. Or 27 million need to take a 50 percent pay cut. Or there needs to be some combination of the two, all without comparable drops in quality and while handling higher demand.

When the advocates talk about cutting costs, they don't talk about putting people out of work, do they?  Can you imagine a politician campaigning on wanting to put 14 million Americans out of work?

The public in general, but especially leftists, seem to have terribly inaccurate ideas about company profits.  The American Enterprise Institute published a study back in 2015 in which people were asked as rough guess what percentage profit companies make.  The average response was 36%, which is only 5 times higher than reality. 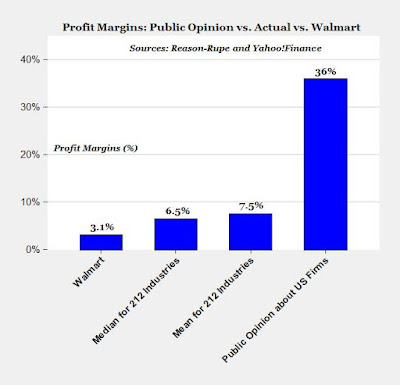 With ideas this distorted from reality, it's not surprising that Bernie, Occasional Cortex, and the rest try to sell the idea that they can save money by eliminating that big profit.

The truth, of course, is far more sinister.  By taking control over health care the Fed.gov gets total control over every aspect of your life and death.  It has always been, and still is, the dream of tyrants everywhere to have that control over the masses.