Is it Immoral to Kill? - Bioethicists

Dang, I got that punctuation all wrong - the question mark is in the wrong place.  I should have written that as "Is it immoral to kill Bioethicists?"

An interesting story broke on Friday that I'm sure relates to the implementation of Obamacare.  BioEdge, an online news source for Bioethics, reports on a paper "Is It Morally Wrong to Take A Life?"  The actual article is on the Journal of Medical Ethics, but I can only show the abstract.  BioEdge excerpts the journal article, though.


Is it morally wrong to kill people? Not really, argue two eminent American bioethicists in an early online article in the Journal of Medical Ethics. Walter Sinnott-Armstrong, of Duke University, and Franklin G. Miller, of the National Institutes of Health believe that “killing by itself is not morally wrong, although it is still morally wrong to cause total disability”.

Skipping ahead to the money quotes:


Rendering someone totally and permanently incapacitated is just as bad as taking a life, or so they contend. Killing totally disabled patients does them no harm.


“Then killing her cannot disrespect her autonomy, because she has no autonomy left. It also cannot be unfair to kill her if it does her no harm.”

Nor, they say, is life “sacred”. The only relevant difference between life and death is the existence of abilities – and a brain-damaged person no longer has these.


“[I]f killing were wrong just because it is causing death or the loss of life, then the same principle would apply with the same strength to pulling weeds out of a garden. If it is not immoral to weed a garden, then life as such cannot really be sacred, and killing as such cannot be morally wrong.”

What an interesting world medical ethicists live in if weeds and humans are equivalents! Folks, if you've heard the term "slippery slope" before but were never sure if you'd seen one, read that last couple of paragraphs again.  That's a Teflon slope covered in grease.

Note that these are not "nobodies" that no one will listen to: this is from the National Institutes of Health and Duke University.  Because they're unwilling to accept any historical standards of right and wrong, they feel free to define their own standards.   This has happened before in history: the eugenics movement that culminated in the Nazi holocaust comes to mind, but Margaret Sanger's American eugenics movement that tried to sterilize and eliminate children from blacks, minorities and the disabled was cut from the same cloth, only a more modest cut.  Her organization is, of course, known today as Planned Parenthood.

I'll bet the underlying reason for this is Obamacare, which is going to force the government to decide who gets what level of care.  Sarah Palin famously talked about death panels that will decide who gets treatment and who dies.  Under the Whole Lives system (link to pdf), which was developed by another group of bioethicists, the chances of you getting treatment for something are poor for babies and old people, peaking, instead, for young adults in the first half of their careers.  The system was developed by a group including presidential advisor Rahm Emanuel's brother, Ezekiel, and is encoded in Obamacare. 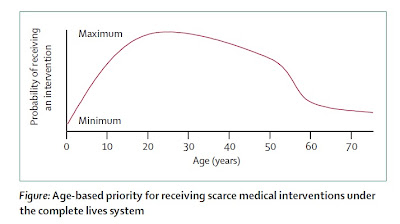 As I wrote once before:


In this system, it's acceptable to let a 70 year old, die while giving care to a 25 year old, because their life is worth more to the collective - excuse me - worth more to society.  To paraphrase their quote, "it's not discrimination to deny care to the 70 year old and give it to the 25 year old.  Everyone who is now 70 was once 25 and the majority of those who are 25 now will be 70 some day".   In other words, "we can screw you now because we didn't screw you earlier; and if we're not screwing you now, wait until you're 70 and then you'll really be screwed."

The implications are obvious: if a twenty-something needs a liver or kidney transplant and a suitable donor person below 10 or over 50 (judging by Emanuel's chart) is available, these ethics standards say go ahead and kill the kid or kill the grandma and get the working "unit" back to work so "it" can make money and pay taxes to the mighty Fed.gov hydra.

Notice that according to these ethicists, "The only relevant difference between life and death is the existence of abilities", and since anyone who refuses an outside, existing standard may set their own, I'd like to mimic them and set my own standards for ethicists:

I have a set of partial differential equations that need to be solved using the Method of Frobenius, could you do that for me?  No?  How about a set of three simultaneous ordinary differential equations in three unknowns: can you solve them for me?  Don't have that ability?  Maybe math isn't your strong suit.  Can you run a lathe and turn a part to better than five tenths (.0005") accuracy?  No?  Can you run a fishing boat or set a trotline?  Do you know how to analyze the stresses on a bridge?  Can you grow a crop of vegetables?  Build walls?  Don't have many abilities, there, do you, skippy?

You may load one in the chamber, gentlemen. Using their own standards, the answer to tonight's question is apparently "no, it is not immoral to kill bioethicists".