Actually, I was going to write a satire about this, but have had too much to do tonight.  Instead, I'll link to this excellent piece by Joseph Curl in the Washington Times: The Truly Dismal State of the Union.  A taste:


There is one person — one American among the 300 million of us — who is not to blame for the state of the union. Everyone else, each of you, in some small or large way, bears some share of the blame, but not this guy. Not one little bit.

This guy is Barack Obama. He is not the least bit to blame for the dismal state of the U.S. economy. George W. Bush is, for sure, and that evil Dick Cheney, oh, no doubt... 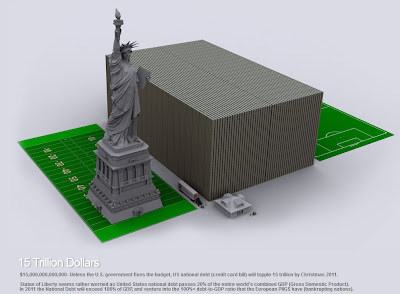 $15 trillion dollars in stacked pallets of $100 bills - from two months ago when our "on the books" national debt reached 100% of GDP.  For perspective, it took from the foundation of the USA until the last year of the George W Bush administration for the debt to reach $10 Trillion.  In roughly 3 1/2 years, debt has increased by $5 trillion - 50%. At the current rates, on this date in 2015, just three years, the debt will be over $24 trillion an increase of $12 trillion - 60% from today's mind-boggling debt (from the DebtClock's Time Machine feature).