The Manufacturing Sector in the US. - Far From Dead

H/T to Bayou Renaissance Man for a link to an interesting piece in the Atlantic on manufacturing in America today.  It's a long and complex piece on a complex subject, but it's worthwhile to RTWT.  The story focuses on a company in South Carolina which manufactures fuel injectors and other complex, precise parts for the auto industry.  We hobbyist machinists are never under time pressure in our projects; if anything, we shape metal to get away from thinking of those time pressures.  In manufacturing, time is money and getting the job done right with minimal waste, then doing it better the next time, is the mantra.


I came to think of Standard Motor Products as an enormous machine that regularly scans every tiny part of every engine in every car on the streets of the United States to answer two closely related questions: What makes sense to manufacture here in the U.S., and what should be made in a low-wage country, like Mexico or China?

I've worked in electronics manufacturing for virtually my entire adult life; first as an electronics technician, and eventually as an engineer.  If there's one constant, it's the refinement of processes to run more automatically and require fewer but higher-level people.  (I suppose the other constant since 1975 has been people telling me we don't manufacture anything in America anymore). I see the same trend in the Atlantic piece.

If an engineer from 1975 had been put in suspended animation and brought back today, they could look in today's typical electronics box, like an iPod, or other toy, and not recognize a thing.  There are some parts that haven't changed much, because the physics that rules them is so unforgiving that no better ways have been found, but it wouldn't be obvious for most uses. The size of components has shrunk dramatically and inexorably, such that most of them no longer have lead wires attached to them, but rather are tiny pieces that appear to be ceramic flakes (a part smaller than a red pepper seed, .040" long by .020" wide, is not considered small today).  These tiny ceramic chips have metal plated onto their ends which are soldered to a circuit board.  The only practical way to handle and solder parts like this in volume is with machinery, removing many of the semi-skilled workers in the work flow.

The National Association of Manufacturers says the US is the largest manufacturing sector in the world, with China number 2 and Japan at 3.  Even if you swap the US and China, the manufacturing sector still produces a lot in this country.  Kevin at The Smallest Minority ran a piece on Sunday about the manufacturing of iPhones.  It focused on a New York Times piece that basically said the iPhone is made in China because it couldn't be made anywhere else; every part is made in a city less than 25 miles across.  It feeds the illusion that it couldn't be made here because no such places exist in the US.  I call bull crap on that. Too much is made of the wage differences between here and China or India and not enough is made about our advantages in high-tech.  In the Atlantic piece the Standard managers are saying they won't go to China unless they save about 40% in the cost of the part, to cover the indirect costs, I'm sure.

I would argue the US' biggest problems are not our wage structures, but our regulatory and tax structures (link is to a pdf).  As always, government is the problem.  Our corporate tax rates are punitive - either the worst or second worst in the world (everybody, all together, corporations don't pay tax, they raise their price to collect the tax - or they get out of the country).  Our regulatory processes have been made up as make work programs for lawyers and they look it.  Still, while we may not manufacture ten million of this years' hot computer toy, we produce billions of dollars worth of industrial and other products.  The NAM says that taken by itself, US manufacturing would be the 9th largest economy in the world.

I vaguely remember a Joe Biden quote that struck me with such force, it almost knocked me over.  If Joe gets it through that titanium skull of his, anyone should get it.  Over a decade ago, I believe, he said, "we have to be careful that if we really want to create jobs, we can't be too anti-business in our message". 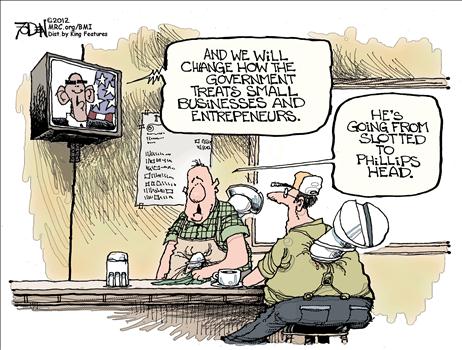