I suppose it's not surprising that the Department of Fatherland Security feels they are authorized to monitor journalists or anyone who uses "social media" and collect whatever personal information they'd like to collect.


Department of Homeland Security now has permission under the National Operations Center (NOC)’s Media Monitoring Initiative to collect and retain personal information on "journalists, news anchors, reporters or anyone who uses 'traditional and/or social media in real time to keep their audience situationally aware and informed.'”

Sounds like all of us bloggers in the "liberty sphere" to me, although the "in real time" thing doesn't really apply.   The story appeared on The Blaze, where reporter Tiffany Gabbay wrote:


According to DHS, the definition of personal identifiable information can consist of any [information - edited] “that permits the identity of an individual to be directly or indirectly inferred, including any information which is linked or linkable to that individual.”

I have always assumed this is the case, but that they just didn't say they were doing it - or they were monitoring us indirectly through a partner of some sort.  It has long been the case, for example, that the NSA was not legally allowed to monitor Americans at home - which was enforced by the FBI, who considered it "their turf".  So the NSA let one of their foreign partners, like British intelligence, monitor us and hand the data over.  I read that somewhere online, it must be true.

According to an absolutely peachy pdf file at the DHS, they feel they have the right to collective personally identifiable information (PII) on (some emphasis added by me):


Previously established guidelines within the administration say that data could only be collected under authorization set forth by written code, but the new provisions in the NOC’s write-up means that any reporter, whether someone along the lines of Walter Cronkite or a budding blogger, can be victimized by the agency.

This strikes me as blowback from Bradley Manning, and Julian Assange (the heart of Wikileaks), as well as the use of social media in the "Arab Spring" uprisings and even the use of Twitter in the Occupy Whatever protests.  The "real time" angle seems to be directed at the latter sort of example: they want to know who's tweeting where the police are, or coordinating riots.

The people fed.gov has granted themselves permission to monitor are considered a threat to their power and fed.gov's (assumed) monopoly on the narrative.  This recalls Donald Sensing's post I linked to Monday, "The Left's Only Question: Who is to Rule, That is All" As GardenSERF commented yesterday, 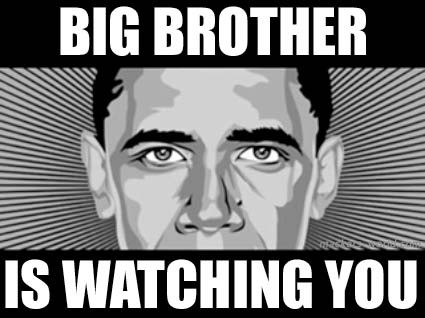 (image source and the orignator)
Posted by SiGraybeard at 9:11 PM