Remember this post - a link to Popehat on how "'using stored information to create physical items' in 17-aught-mumble and 20-aught-mumble" inevitably leads to home made guns in the 21st century?

Conversations this week have led me down some of those pathways again this week, and I stumbled across a description of an AR-15 lower receiver made from HDPE.  If that doesn't ring a bell right away, HDPE is high density polyethylene, a plastic commonly used in stuff like kitchen cutting boards! (the link, btw, was posted by our ex-communicated buddy TJIC...)  as published on that link: 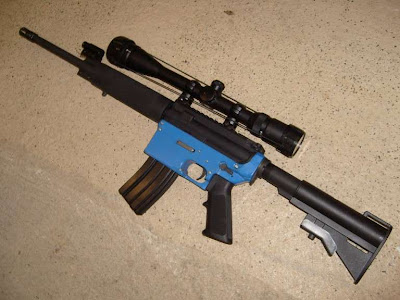 This has been test fired and worked, but think of it as Beta level; he needed a bunch of playing to make it work.  The point is, this is a fully functional AR with the lower receiver body made out of - basically - a kitchen cutting board (I don't have enough exclamation points, so I won't use any).

Do you need more justification to have a home shop?

I see the fed.gov decided to allow the importation of 86,000 M1 Garands from South Korea!.  This is a Really Good Thing.  (Let me tell you about my Garand children)

We've talked about getting started with machine tools before, (in many places, really) and I've commented on the big gap between a model maker's size tools like the Sherline or Taig and the big tools.  I've been looking into replacing my manual Sherline with a bigger lathe, and the next obvious step up is to the "7 by" lathes that all the tool companies sell.  The problem is you quickly get into the "if you spend just a little more you get so much more capability" trap, and you end up with something that costs marginally more, but weighs way more.

A good example is this lathe, which is a really good machine by everything I can determine.  The problem is that it comes with no tooling and by the time I add a reasonable set of accessories, I end up at about $11-1200 out of pocket, maybe more.  For 50-$100 less, I can get this lathe delivered to my door, along with a good set of tooling.  And a bonus box full of hernias.  The first one weighs 86 pounds, and is a weight I think I can reasonably handle.  The Griz weighs about 250 - a bit much for one man lift.  On the other hand the Griz will handle a much larger work piece, 9" in diameter over the bed, instead of 7".  Both of them have much more motor power than the Sherline, and the smaller motor of the two (2/3 HP vs. 3/4) may be better because it's a DC motor with infinite speed control, instead of just a handful of set speeds.

Then there's the performance gap: as I think I've said, at a meeting of the North American Model Engineers Society (NAMES) I saw a fantastic modeler, Jerry Keiffer, pull a stock Sherline lathe out of the box, chuck up a 1/2" diameter by about 1" long steel rod, and cut it down to .010" diameter in 5 cuts.  And then drill a .005" hole down the center of that .010" nub.   You won't do anything with one of these right out of the box except disassemble them and clean them of the goop they are coated with for the journey from overseas (usually China).  They probably won't do that sort of accuracy without some extreme tweaking - if ever.  On the other hand, it will handle interrupted cuts and other machining tasks that would stall the Sherline - if not shake it apart.