I stumbled across an interesting piece of legalese yesterday, that apparently has been making its way into all sorts of places.  I have the Weather Channel app on my iPhone, and have been using it for over 2 years.  There was an update the other day, I installed it on Wednesday night, and promptly forgot it.  Turned it on yesterday and was greeted by a new EULA, a Terms of Use and Privacy Policy that you must agree to before you can see the forecast.  Admittedly unusual for me, I started reading it a little ways, and was soon floored by the amount of legalese there was.  I swear there must be well over a hundred iPhone screens of text to read.  But one thing jumped out at me.  Regarding using their "services", anything you post:


... will be treated as non-confidential and non-proprietary and will become the property of TWC throughout the universe.  (emphasis added)

Throughout the universe?  I pointed this out to the ever curious and master of Google-fu Mrs. Graybeard and after some amazement and puzzling over the wording, she soon showed me it's been going on for a while.  In fact, they often say "throughout the universe in perpetuity".


Experts in contract drafting say lawyers are trying to ensure that with the proliferation of new outlets -- including mobile-phone screens, Twitter, online video sites and the like -- they cover all possible venues from which their clients can derive income, even those in outer space.

All I can say is: across the entire universe?  Did anyone get Klingon Chancellor Gowron's opinion on that? 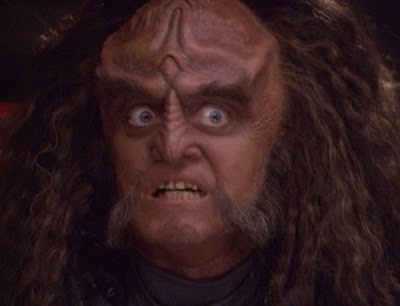