I gather those of you in the parts of the country where there's this thing called "winter" have been having a mild one, so it has been good weather for being outdoors.  Ours has been warm, like 80 most days, but is getting colder tonight.  Current forecast is for 33 and 29 tomorrow night.

Part of good weather for being outdoors is that I see Borepatch, Random Acts of Patriotism and Brigid have posted range pictures in the last few days. And that's just a few.  Although it didn't go over 75 today, we went to the indoor range.  I took some cellphone video of the diminutive but deadly Mrs. Graybeard shooting her S&W, .38 special, and frame grabbed this with some playing around. 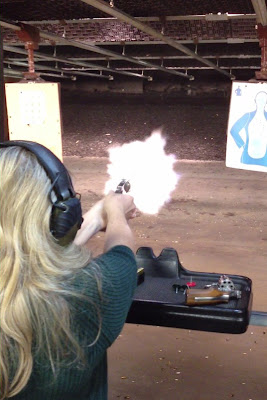 On the table is that .22 Rossi I wrote about in November.  I had a bunch of failures to fire in the Rossi, with bulk Federal .22LR (this stuff - not a customer, no kickback, yada yada), and some FTF with a box of PMC Moderator subsonic.  I'd say no big deal - you usually get a few duds with cheap bulk ammo, but we were using two guns: a S&W 22A semiauto and that Rossi revolver.  In the 22A, every round went bang, while I probably tossed a half dozen from the Rossi.  Seems like the strike must be too light, and I think I'll have that checked.

We didn't bring everything, just a few handguns.  All things considered a wonderful way to start the new year.