Yo: TSA. You're Not Making it Any Better

Remember back around Christmas when a woman had her cupcake confiscated by the TSA as a security threat?  Ok, it turns out that this wasn't a normal cupcake.  Like me, you probably envisioned the cupcake on the left.  The TSA says it was the one on the right: 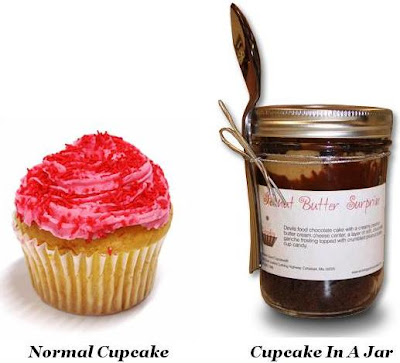 I'm terrified, I tell ya.

The TSA runs a blog where someone will comment on stories like this and "Blogger Bob" brings the TSA official story to the party.  The problem is their explanation just doesn't make it better.  Let me try to pull some quotes to show you what I mean:


I wanted to make it clear that this wasn’t your everyday, run-of-the-mill cupcake. If you’re not familiar with it, we have a policy directly related to the UK liquid bomb plot of 2006 called 3-1-1 that  limits the amount of liquids, gels and aerosols you can bring in your carry-on luggage. Icing falls under the “gel” category.  As you can see from the picture, unlike a thin layer of icing that resides on the top of most cupcakes, this cupcake had a thick layer of icing inside a jar.

So it wasn't a run-of-the-mill cupcake, it was a particularly scary cupcake; not just a little puff of cake with a smear of frosting on it, this is jar full of frosting with some cake allegedly embedded somewhere in it.  Looking at the Cupcake of Doooooooom  ... um, excuse me, Cupcake in a Jar, I was immediately struck with fear -- of diabetes, not of a bomb.  Blogger Bob goes on to say:


In general, cakes and pies are allowed in carry-on luggage, however, the officer in this case used their discretion on whether or not to allow the newfangled modern take on a cupcake per 3-1-1 guidelines. They chose not to let it go.

So a pie is smaller than this jar o' frosting?  A whole pie doesn't contain more than 3 ounces?  That's some wimpy pie!  Momma's key lime pies would certainly contain over 8 ounces of filling - and you'd best not try to put one in a zip lock bag, if you don't want Momma to chew your head off. .

Alright, I'll get serious.  The first problem this illustrates with the TSA is that the rulings are "arbitrary and capricious"; they're never the same from agent to agent, from airport to bus station.  The same woman - and others - have flown with more of these cupcakes many times, and are probably flying with them today.  The second problem is that their rulings are illogical: would you think a pie is more or less likely to be stopped than a jar of frosting?  I personally would guess there isn't even more than 3 ounces of frosting in there.  But the real trouble is the big one: this is security theater.  I'm sure these agents think they're doing the right things, but security doesn't come from stopping things it comes from stopping people and that ain't going to happen until we start allowing El Al style passenger profiling and interviews.  Right now, the TSA antics are beyond useless, they're threatening real security by creating a false sense that they're doing something useful.  They need to be sent home, with about 40% of the government work force.